The Mapchester weekend ran over Saturday 13th and Sunday 14th May, 2006. Over 40 individuals attended, some for both days. The vast majority were new to OpenStreetMap and to GPS, so we had fun explaining how the process of gathering track data occurs and how to use a GPS receiver in order to get them out logging streets and gathering their street names. Most of those that attended were on foot and therefore the central area of the city within the inner ring road became the focus, which was a also the focus for Futuresonic anyway.

The final interactive map beta used at Futuresonic can be found here. Below catalogues the development of the mapping during the Mapchester weekend. 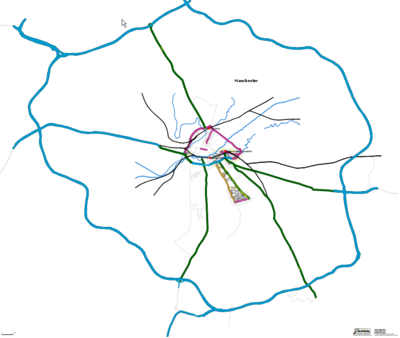 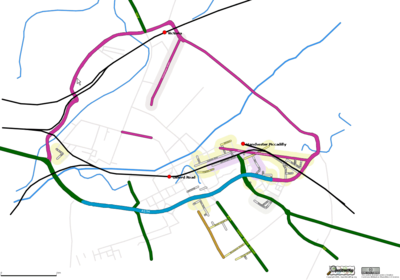 And below are the gpx traces from the weekend. 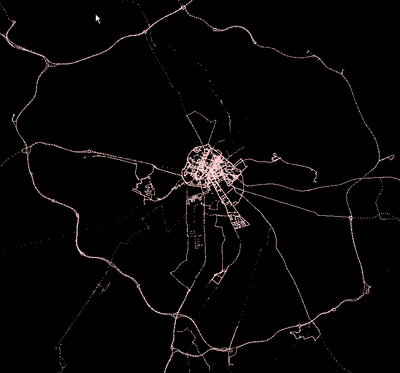 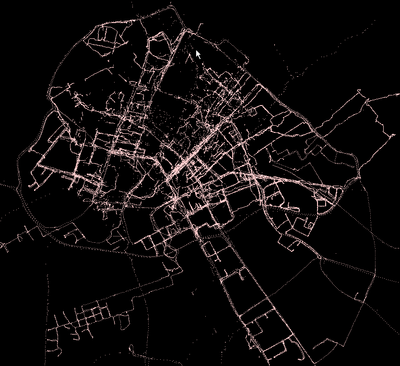 What's it all about?

'"When bands like the Happy Mondays stalked the Hacienda, Manchester was dubbed Madchester; now, a new generation of phreaks are in town, renaming the city Mapchester, showing that it isn't just music that puts the city on the map."' 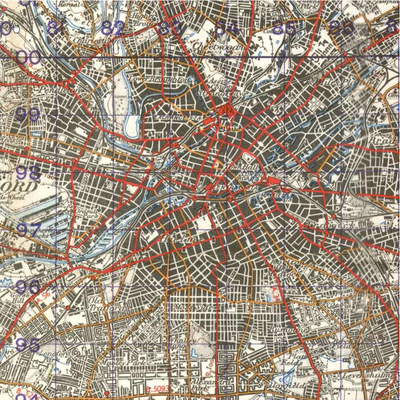 A pdf version of this intro is available here

OpenStreetMap is a voluntary not-for-profit organisation that anyone, anywhere can join. The goal of OSM is to provide free maps that can be used by anyone. All of our maps are freely available on the internet at www.openstreetmap.org.

Why would anyone want to do that? Aren't there are lots of free maps out there?

Most of the maps that you come across on the internet or in your home are protected by very stringent copyright laws. These rules stop the maps from being used in unique and unexpected ways, stifling people's creativity and imagination.

So how does it work?

Anyone with a handheld Global Positioning System can start mapping straight away. You need to set your GPS to record tracks and then go for a walk or for a bike ride or a drive. Walk around some streets in your neighbourhood, making some notes about the street names and any one way streets or round-a-bouts that you find. When you get home, plug your GPS into your computer and upload the tracks that you recorded onto the OSM website. Within an hour or so, you tracks will appear on the website. You can then use the online tools to create a new map of the roads and street names that anyone in the world will be able to see.

Why did you come to Manchester?

Mapchester follows on from a very successful weekend mapping the Isle of Wight, which demonstrated that it is possible for quite a small team of volunteers to achieve a lot in a small period of time. Over this weekend we hope to introduce even more people to the fun of creating free maps and at the same time to help create the basis for maps that will be used during Futuresonic 2006

Anyone with access to a GPS unit and a computer with an internet connection can join in. Even if you don't have a GPS, you can see what maps have been made of your area and improve them. Add street names and points of interests and make the maps even more useful. A full Q&A sheet to help you in how to go about this process is available and the project wiki website has lots more information.

GPS stands for Global Positioning System. The system is made up of around 24 satellites that are constantly orbiting the earth, transmitting information about their position and time. The information they transmit is a type of radio wave, and can be picked up and understood by handheld GPS units or Satellite Navigation systems in cars. By comparing the signals from at least four satellites it is possible for a GPS unit to work out its position anywhere on the earth to within 5 to 10m.

GPS units are not tracking devices. They only have receivers not transmitters. It is not possible for someone to track you if you are using a GPS receiver.

What do you need to bring

If you have it please bring your own mapping kit (gps, laptop, camera etc). If you don't have a GPS receiver don't worry, there will be a number of extra units available on each day. If you have never used a gps receiver or done any mapping before, don't worry either, 'hands on training will be provided - no prior mapping experience is needed'

A pdf version of this Q&A is available here

A. A GPS receiver is needed to lay down “tracks” for upload to the OpenStreetMap server.

More. A number of GPS receivers will be available on loan on the day. However if you do not have a GPS receiver, your GPS receiver does not record tracks (for example many GPS navigation systems for cars do not), or a loaned unit is not available, then you can still help by undertaking manual surveying of street names and special points of interest (POI’s).

Q. I have a GPS unit that can log tracks. What does OSM need?

A. OSM needs raw tracklogs that contain the time and location of each point in the log. Extra information is fine but a requirement

More. Set your GPS to record a tracklog at 1 second intervals if you can. However most hand held GPS receivers have a limit on the number of trackpoints that can be stored before they are downloaded, so adjust the time interval if the log will fill up before the end of your logging session (eg a morning or afternoon).

On Garmin units, do not “save” your tracklog on the GPS unit. This is because when saved, the log is filtered and time and other useful information is lost, making the file pretty much useless to OSM.

A. The target is to log all the streets and other major transport paths within the M60.

More: We have carved up the basic plan of Manchester within the M60 into sectors within 3 rings (Inner, Middle and Outer). Each sector has a reference number(s), select a sector you would like to survey and put your details against it on the Survey Area Sign-up Sheet which will be held at the base camp: Mapchester HQ (MDDA), Lower Ground Floor, 117-119 Portland Street, Manchester M1 6ED. If you cannot get to the base camp, then let someone else know so that it can be added to the sheet. This will avoid duplication.

Alternatively you are welcome to map an area outside the M60 if that is your interest. Just let the project know so that it can be included in the “big picture”.

Q. Which mode of transport is best?

A. It is generally considered that a bicycle is the best method for logging streets and collecting street data.

More. Walking is fine but you cover less than half the distance you can on a bicycle in the same time. You will also find that your logs are less easy to interpret when editing into a map. Walking is best used for footpaths and where access is difficult. It is also the preferred method for gathering points of interest and other data by hand.

There are also times when a car is best, for mapping Motorways of course but also for other high speed routes such as trunk roads and dual carriageways. In modern housing estates, a car is generally no quicker than a bicycle for logging, although it’s warmer and dryer when it’s raining!

If you are using a handheld GPS receiver, it can normally be affixed to handlebars with strong elastic bands if a purpose mount is unavailable. In a car, they can be placed on the dash or wedged between the dash and the windscreen.

Whichever mode of transport, make sure the GPS receiver has a full GPS satellite lock before you start off.

Q. Is there any other data that OSM needs in addition to GPS tracklogs?

A. GPS tracklogs only provide a means of establishing the basic lines on the map. To be useful, these lines on the map need “tagging” with additional information, such as Street Names.

More. The list of additional information that could be useful is extensive and it is not expected that all of it is gathered during surveying and track logging. However the following details area really useful and an effort should be made to record them where possible:

4. Points of Interest. Maps look great when you add useful information, such as the location of major amenities. Hospitals, stations, post offices, places of worship, schools etc etc. In fact whatever you would like to collect location information on can be stored in OpenStreetMap. (Note though that OSM does not currently directly import "Waypoints". Waypoint's can be placed within your GPS log and uploaded to OSM but at this point in time they will not be written to the database. This is a function OSM is activly considering.) For more on mapping points of interest see Mapping techniques page

You can find more suggestions on what to collect on the Map Features page of the OSM wiki. There are also guidelines with the Junction data Collection sheets.

Q. What methods are best for recording additional information?

A. Digital cameras are great for recording factual information such as street names and road signs. A dictaphone or Notepad/clipboard is equally useful.

More. If you are using a digital camera, change the time in the camera to UTC (ie GMT – so put it back one hour from the time in Manchester at the weekend). Also for calibration purposes take a picture of your GPS displaying the current time. Most units display it somewhere. Then supply your photos and this calibration image to the OSM team and we can view them together with your GPS log in the JOSM editing software. Or do this yourself if you are editing your own logs and turning them into mapping on the OSM platform.

Q. Are there any other things I should know? 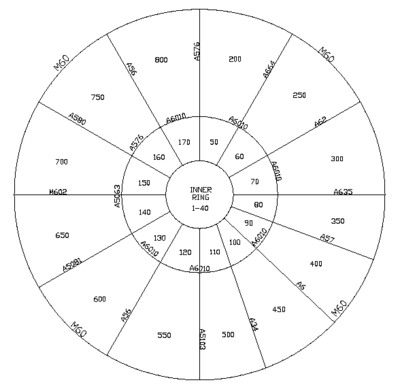 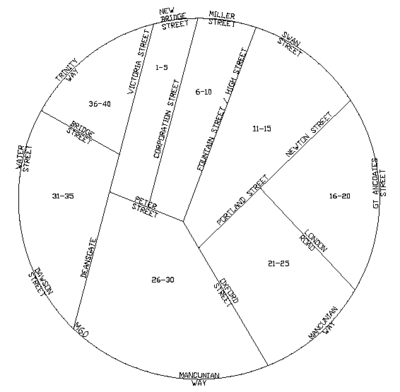 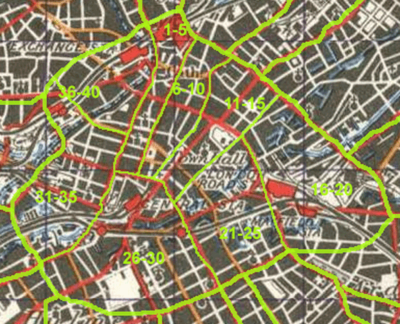 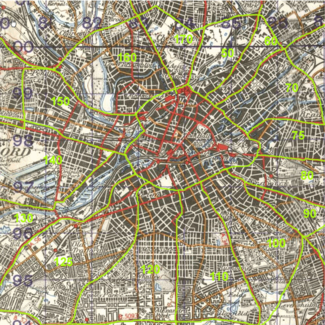 The above schematic drawings break down Manchester into a set of logical sectors. Each sector is bounded by major or prominent highways. There are three rings identified within the M60 orbital motorway. A nicer version woth the OSM logo can be downloaded here (4MB)

A few others need to cover the railways, tram and canals. Although the M60 is already in OSM, it’s not very detailed so someone driving the ring in both directions together with all the slips and adjacent roundabouts would improve this appreciably.

To help with planning during the weekend the link here is to a two page Survey Area Sign-Up Sheet which can be used to avoid overlap of surveying and focus the fun in a logical way.

Have put together a Junction Data collection sheet and instruction key which can be found here. It should be of use for taking notes when mapping an urban area, especially if you do not have a gps or a camera. A great way to get involved if you are not so technically minded. Blackadder 10:19, 8 May 2006 (UTC)

What they are saying about it