Birmingham is regarded as England's second city, although residents of Manchester might dispute this. Strictly, The city of Birmingham is one part of a larger urban conurbation including Wolverhampton, Walsall, West Bromwich, Solihull and others.

State of the Map

State Of The Map 2013 was held in Birmingham.

The city and its metropolitan area are fully covered by OpenStreetMap with the map inside the main motorway ring (M6/M5/M42) completed by Christmas 2008 (See the Mappa Mercia/Birmingham page on that). The map includes all roads and already lots of footpaths and POIs.

Birmingham serves also as a test bed for the import of the NaPTAN database -- a nationwide database of public transport access points. All bus stops within Birmingham have been added to the OSM database and are now gradually checked and tagged so that they appear on the map. 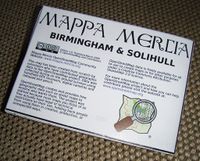 An OSM paper map of Birmingham 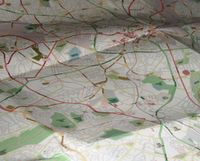 Detail of the Birmingham map

After Birmingham was completed Blackadder produced 50 copies of a printed map of Birmingham. The map is A0 sized and printed on nice thick paper. It shows the area within the motorway ring as it appears on Mapnik with zoom level 14. If you are interested in a copy contact Blackadder.

To find out what's going on in the Birmingham area check out the Mappa Mercia page. You will find a there is a regular monthly social and an active local community.

We raised money in 2010 to buy aerial photography for the area to help increase accuracy of road alignment and add land-use details. Since 2011 mapping using BING imagery has extended the ability to map detail within the city.

Our main target currently is to finish the Black Country. But there are also many other mini projects going on.

See the Mappa_Mercia page to find out what's being mapped in the West Midlands. Join the Mappa Mercia OSM user group today!

The following users are involved in mapping Birmingham:

Some older information that used to be on this page can now be found on Birmingham/Archive.