The content of this page used to reside on the main Mappa_Mercia page but has been moved to a sub-page since the work on Birmingham was completed at Christmas 2008.

Thanks to a herculean effort, the beginning of winter 08 has seen the remaining western parts of Birmingham mapped to principal "completion" That's the whole of Birmingham city plus everything else inside the M6/M5/M42 motorways. The final push started on Nov 6th 2008 with the aim of completing by by Christmas. This was achieved. The two images below detail the OSM "cake" sections that needed to be mapped to complete . The table below the maps shows the progress of finishing off these sections.

Here is the map. If you would like a folded printed copy (A0 size unfolded) then contact blackadder at gmail dot com. The cost is £8 plus postage and packing. Each print is a numbered limited edition. Only 50 exist.

In the new year the local contributors (Midlands User Group) will be meeting to discuss how to take things further. We plan to promote the finish work and expect to see a start of the data being used for some cool new output. The groups activities can be found here.

Remains of the cake 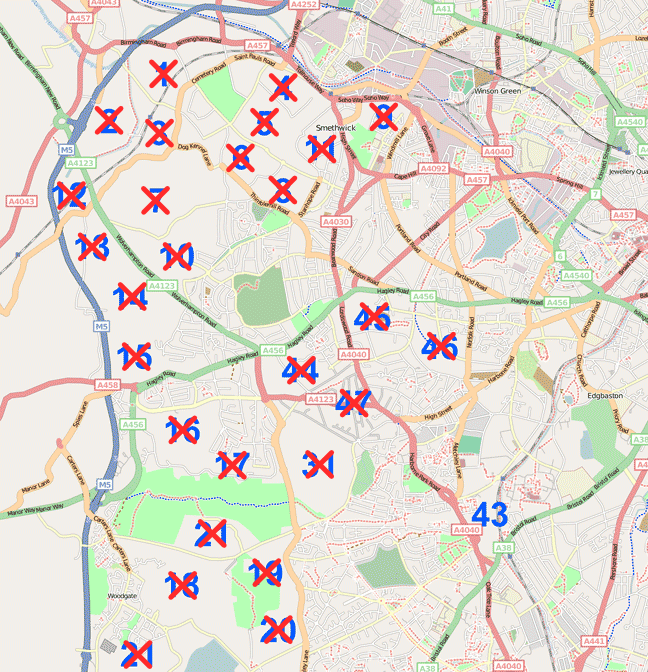 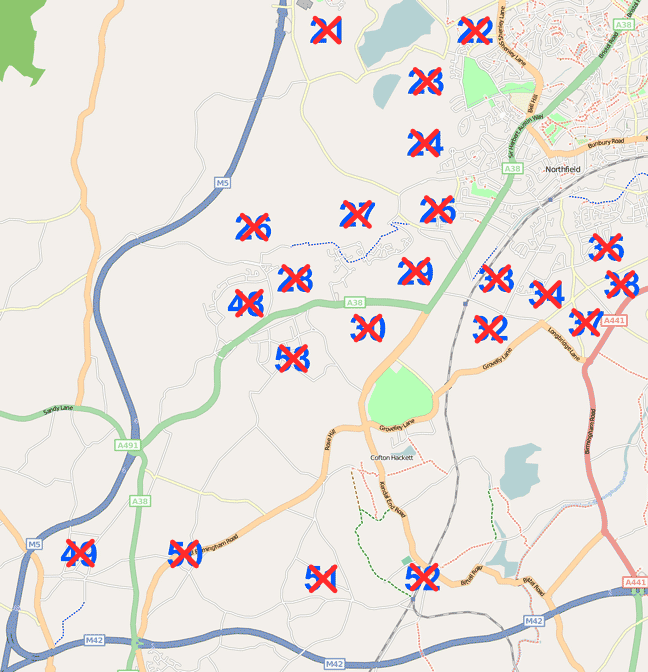 Before Xmas ? That means about 7 slices a week! DONE (nom nom)

Who's contributed to the Map of Birmingham?

In all there are just over 100 contributors (actually those that have the last touch on an item in the database). The vast majority of the data has been contributed by 10% of these contributors. Results for top 10 (approximate statistics for ways alone as of 9 Dec 08) are:

Once we are done we should send an email to every contributor. Would be really cool to get everyone at a non-mapping party :-) This is now planned for the April meet

Edit this with minor improvements only - it's the result of several people and several weeks. A formatted version will be avaialble at the Feb 5th Meeting

OSMs own guide to writing a press release

Another first for Birmingham! "OpenStreetMap is a free editable map of the whole world. It is made by people like you." Today Birmingham takes a huge step to becoming a digital City. The metropolitan area of Birmingham and its environs within the motorway ring have now been completely digitally remapped by its own citizens in a format which is freely editable and available at www.openstreetmap.org.

It is the first English city to be completely remapped in this way. It joins the likes of Paris, Berlin and Canberra. Birmingham now has a digital map that is more up-to-date and accurate than all other online or satnav maps. Only Ordnance Survey can claim to be more accurate - and they have huge technical and financial resources at their disposal. (Click here for a detailed view of Birmingham )

The OpenStreetMap of Birmingham has been created by local people, with local knowledge, who take pride in how their neighbourhood is represented and can match, and even surpass, the efforts of commercial mappers who spend millions creating this kind of rich data. A dedicated band of 100 volunteers has been collecting GPS data whilst cycling, walking, and riding the buses and trains. One of our team has even mapped by canal boat!

The raw positional data is supplemented by additional visual observations on the ground and then edited into a format that can be rendered as a map readable by humans. All the software used in the project has been developed as open source software and is free to download and use. All participants have to do is invest their time and pay attention to detail.

“It’s very satisfying to see a complete city mapped in OpenStreetMap. Four years ago when this project was created we were looking at a blank screen and most commentators thought we were crazy.” said Andy Robinson, secretary of the OpenStreetMap Foundation and a prolific mapper in the West Midlands.

The Birmingham effort is part of a world wide movement to digitally remap the entire world which started in 2004. The project was originated in the UK and now involves some 85,000 enthusiasts globally, who have so far mapped almost 14 million miles of road globally. We have mapped 15,000 residential roads, 6,000 footpaths and 9,000 other roads in Birmingham ( and over 700 bus stops and 300 pubs and 200 traffic lights and 300 postboxes)

Why re-map the world?

We need a free dataset for programmers, social activists, cartographers, and communities and the like to use geodata and create maps suited to their purposes without being limited by proprietary restrictions designed to protect large corporate investments in data collection. Under-developed countries are particularly helped by a project of this sort, because it is just not economic for commercial mappers to map their areas.

How can it be accurate? The essence of a wiki-style process is that all users have a stake in having accurate data. If one person puts in inaccurate data, maliciously or accidentally, the other 99.9% of people can check it, fix it, or get rid of it. Just think how amazing it was a few years back when you saw Google Maps for the first time. Suddenly mapping was cool, and access via an API* lead to a wave of innovation. Satnav was nowhere 3 years ago. Look at it now! But you still can’t access the incredible amount of data locked behind the API and you can’t add or improve it, so your applications are limited. Just think of the explosion of innovation, much of it in unexpected areas, that’s possible when the data is freed!

All the software used in the project has been developed as opensource software and is free to download and use. The data and maps are licensed by Creative Commons which defines the spectrum of possibilities between full copyright — all rights reserved — and the public domain — no rights reserved. What this means to users (and this isn't legal advice) is basically you can do what you like with the data, so long as you mention the original creator and the licence and anyone else can do the same with anything you produce.

A flagship example of the power of opening up access to geodata is OpenCycleMap. It’s a customised online map for cyclists, based on OpenStreetMap data. It shows things that are interesting to cyclists including signed cycle routes, offroad cycle paths, bike shops and bike parking - and of course hills - whilst diminishing other things like motorways that are of little interest. It’s built on top of OpenStreetMap, and was recently commended by the British Cartographic Society.

1. There’s most of the Black Country to map for a start!

2. Local businesses and organisations can start using OSM maps and data, rather than proprietary sources, freeing themselves from the technical, financial and accuracy restrictions of commercial mapping providers. 3. Now that we have a complete set of local data, Midlands software developers can start using it to create novel applications (e.g road traffic simulations, tourist trails, restaurant guides).

Why would a business consider using OpenStreetMap data when anyone can use maps from Google, Mapquest or Yahoo for free? In a word: control. An OSM data and map user has significantly more control over their maps than someone who uses a free API. With OSM you can modify, supplement and select the data to create a customised map.

4. It might take a 100 people to produce a map like this but we need a 1,000 to keep it up to date. Help us improve and verify the map via a simple tool available at http://openstreetbugs.appspot.com/. All you need is local knowledge and access to the internet.

More information for editors can be found at:

Feel free to add more - this is only a first stab at it . If you add an organisation please discover an email address to send it to

michelle.carr@birmingham.gov.uk Be Birmingham is the Local Strategic Partnership (LSP) for Birmingham that brings together partners from the business, community, voluntary, faith and public sectors to deliver a better quality of life in Birmingham.

I did a search on british computing magazines (I even found an uk version of heise):