Not to be confused with the Mapping Guide, Korean Tagging Guidelines and WikiProject Korea.

Mapping North Korea (https://mappingnorthkorea.com) is a project based on MapCraft and the Tasking Manager but specifically for North Korea. The map is divided into sector sets by counties and special administrative regions. Each of these sector sets is divided into smaller, 2 by 2km, sectors which can be selected for mapping. Mapping North Korea is open source and can be found on GitHub: https://github.com/MRVDH/mapping-north-korea. Inquiries, issues and bugs are also managed there. Chatting can be done in the OSM Korea Telegram group. 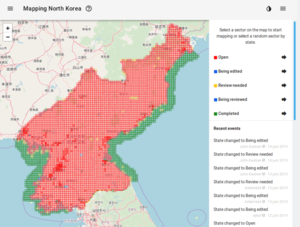 The reason for the creation of Mapping North Korea is that both the HOT Tasking Manager and MapCraft were (at that time) built on an older tech stack, there were no North Korea projects on the HOT Tasking Manager and MapCraft had only one inactive North Korea project. Therefore, a Vue and node.js based project started, specifically aimed towards North Korea, to improve its map. The first commit in the repository was from April 22th 2019, but the project started before this at an unknown date and the repository was created at a later time.

For the first mapping iteration there wasn't a specific definition of what should be mapped, so anything someone would want to map would be allowed. Also, the map was divided into sectors that were somewhere between 10 and 20km in both directions, which was way too large for any quick mapping attempt. The user would have to pause their work and come back at another time, which was too demotivating. In the issues section of the repository a discussion/brainstorm started to find a better way of setting up the sectors and to make the project more motivating to work on. The conclusion was to split the map into regions - sector sets - that would contain all the smaller sized sectors of that region.

In November 2020 work started and finished on creating the sector sets and the new smaller sized sectors. The new sector sets are the counties and special administrative regions of the country. The goal of the new iteration was decided to be just roads to speed up sector completion. Volunteers are still allowed to map more than just roads if they feel like it.

The tile based map was switched for a vector map for a much faster and smoother experience. With that came a switch from Leaflet to Mapbox GL JS since Leaflet has no vector support. During the refactoring Mapbox GL JS became closed source. Therefore, alternatives such as Maplibre GL JS are being looked into as well. Besides the switch to vector maps, a point of interest system was added to mark interesting locations on the map.