After a joke in the IRC channel, I thought it worth starting a page listing all the accidents that happened while out mapping.

There I was, kind of mapping Ms. Nibblesome's barn (nobody ever home, right?) kind of eating her raspberries, when lo and behold, she popped out and scolded me. Jidanni (talk) 07:10, 21 May 2021 (UTC)

I was in the backcountry gathering GPS data for the Northville-Placid Trail (if memory serves, this was the segment I was on), on a very, very wet day. I slipped on slick rocks and faceplanted. I broke my spectacles, smashed my watch, picked up some miscellaneous cuts and scrapes, and sprained a knee fairly badly. I thought about lighting my Personal Locator Beacon, but said to myself, "what is the Search and Rescue squad going to do if they come for me? Put an Ace bandage on the knee, give me painkillers, and walk me out, most likely! I can do that." It took me a day and a half to hobble the 24 km to the nearest highway, a trip to the clinic for X-rays and further evaluation, and then six weeks before I was walking without a cane. But I did get the GPS traces! ke9tv (talk) Trip log

On my first day of gathering GPS tracks for the Northville-Placid Trail, I wiped out trying to ford a river that was running higher than normal, in near-freezing weather. Fortunately, I didn't lose my pack, fetched up on a rock within seconds, and have good enough bushcraft that I had a fire going in minutes to get warmed up and dried out. I suppose this was an 'incident' rather than an 'accident' since there was neither injury nor property damage, but a very near miss! ke9tv (talk) Trip log

I just wanted to take a short ride with my bike to see if the new local photovoltaic field is ready. It's only around 800m in one direction but overall the trip took me around 6h. So what happened? Close to solar field I recognized a cat running over the street....but it pulled something strange behind her. As I got down from my bike I saw it was a steel trap. With another guy who saw it too I tried to get the cat at the neck but I was too slow. With a bleeding thumb I called the police. As the cat with the chain was stuck between some stones she was still there when they finally arrived. It wasn't easy to get the cat into a pet carrier but we manged to do it. They brought her to a local vet. Besides the wounds from the steel trap the vet found a bullet from an air rifle. I had to go to a physician too and a´had too wear a red bandage around my whole hand for 2 days. I neither found out if the solar field was active nor did I learn for my exams as I wanted to after the "short" OSM trip.

Today I was out surveying some hiking trails and I had just finished the trail and got back to my car. I get in the car and start it to warm it up. Then I get out and clear the snow off the windows. When I go to get back into the car... doors locked, keys inside. A phone call to the towing company, 20 minutes and $60 later, I was back in my car. The GPS trace was about 6 km long, so $10/km. The things I do for OSM... Didymops (talk) 22:20, 2 February 2013 (UTC) 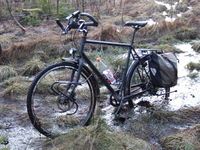 Not really an accident but I liked it. ;) While logging some unmapped ways in the wood I got stuck a little on a wet track. Though the image doesn't imply it I miraculously didn't get wet. -- malenki 19:49, 2 January 2013 (UTC)

Actualy I wasn't mapping the very moment the Accident happend but I was on my way to my mapping area. A young woman came up to the primary through road B145 I was driving along. Well she didn't stop and I had no chance to do so. I tried to avoid hitting her car still I bounded at her rear tyre. Lucky me I drove only 60 km/h so I didn't get hurt but my girlfriend sitting beside me got a whiplash injury. The other girl and her passengers are unhurt. Killed by this accident was my 21 years old car a Mazda 121 DA a realy fine one with a Canvas Top which was superb for mapping. Wrote a memorial songtext on my OSM-Blog based on Bang Bang written by Sonny Bono. RIP Miuccia 1988-2009 feneks 18:25, 08 December 2009 (UTC)

In the last part of mapping Ravensthorpe [1] by bike, I was hurrying to get the last few streets before it got dark. I rode down a mews street at about 15 mph, and just before I emerged onto the road, I hit a washing line that had been carelessly drapped across the street at head height. The rope was nearly impossible to see at that height in the late evening, and the first thing I knew about it was when the rope hit my face, ripped up my lip and sent me crashing to the ground, landing on my hand. Bike was unharmed, but I cut my mouth and bent my right hand index finger (making typing painful). Some residents on the street were very helpful bringing water and papertowels to wash the bloody off, as I dusted myself off the ground. Ironically, following a diary entry about a mapper being mugged in the area, it was the ground that go me, not the residents, who were very helpful! I was ok, but a bit shocked. Had I been going faster, or had it hit differently this could have been very nasty, as I have heard of somebody being decapitated in Coxley woods by a wire stretched across a path. Ravensthorpe still lacks a few minor streets, and I'm in no hurry to return. dylanhayes 11:11, 12 August 2009 (UTC)

I had been long time collecting gps traces, but not actually done any mapping. Just passively following osm efforts. I had noted that roads around cottage of my parents-in-law were not in osm, so when I made after winter maintenance for mother-in-law moped, decided to go around and collect traces for few roads. I was driving on small roads 30 km/h when there was some loose dirt between wheel tracks, lost control on front wheel and fell down. Last NMEA line recorded by cell phone:

After catching breath, drove 3 kilometers back to cottage. Went to doctor to get first aid and week later MRI scan show that I had broken ACL from my right knee. Knee was operated three weeks later. So far the cost for insurance company has been around 17 000 € (including medical expenses and salary payments for my employer). My own cost include mainly lots of time in training my knee back to close-to-normal operation (on average about 1,5 - 2 hours a day) and some stuff that could not be put on insurance (like training bike). On good side I had possibility to photograph lots of road signs as my wife took care of driving while I was under medication and party-operable leg. --puhuri 13:51, 20 September 2009 (UTC)

First time in Leicester for the mapping party, and I am about to stop my bicycle to map a post box. As I put my foot on the ground, I twisted my ankle. Spent most of the day in Leicester Royal Infirmary rather than mapping. [2]. I did get the route in the ambulance car to the hospital. Have some nice bruising and swelling. Bike unharmed. Smsm1 11:56, 9 March 2009 (UTC)

Coming towards the end of about a 3/4 hour session on the bike gathering traces after work - it's dark and for some reason some of the nearby streetlamps aren't working - just about to turn left into a side road - take a quick glance over my shoulder - indicating left with my arm - when I hit a pothole and next thing I know I'm on the surface of the B5086. With a badly cut knee complete with a hole in the trousers I was wearing and a hurting right wrist - I pick myself up and hobble home. The GPS which was mounted to the handlebar has a nasty scrape where it provided some of the braking force - but still works. Next time I get the bike out I discover the back wheel has been damaged in the incident... Richard B 13:17, 9 March 2009 (UTC)

While mapping Terlizzi's Comunal Park (here) my BT GPS (joined with my Nokia 6630) crashed to ground, while I was hanging my head down to see on what kind of surface we were walking. Now I have an Openmoko :D --fradeve11 14:47, 8 January 2009 (UTC)

I don't know if this counts or not - I hadn't quite got to the point of mapping anything, having only just left work. Somehow managed to change to the higher set of gears (which rarely happens on my bike these days) then, possibly distracted by the shock of it happening, I ended up cycling in the gutter. Then I ended up in the gutter.

I suffered several cuts to both hands and one grazed knee. The bikes folding pedal folded.

While mapping some backroads on the way back from Northampton (the A43 was already well done and boring), Dean Earley failed to see a small chicane in the road until it was too late. He turned, braked, skidded and then the car became one with a sign post. At least the light still works....

Taking a mapping detour on my daily bicycle-based commute, it started raining. Stressing to get to my train on time, combined with trying to use the front wheel brake on a wet manhole cover made me crash violently to the ground. sandos 16:33, 14 May 2007 (BST)

Fell off while cycling, and mapping, the C2C. GPS fine. Face not so fine. Sadly didn't have the presence of mind to ask the ambulance driver to put the GPS on the dashboard. --Richard 09:48, 15 May 2007 (BST)

Just started in OSM. Biked all 100+ miles of South Downs Way and recorded GPS tracks all the way. Racing a mate down last hill and crashed 50m from finish sign (breaking dérailleur). Downloaded tracks later to find out that the two days worth of tracks were reduced to last 2 hours each day (as I didn't know limitation of Garmin I have). There are two sections of South Downs Way in OSM waiting to be joined up by someone. 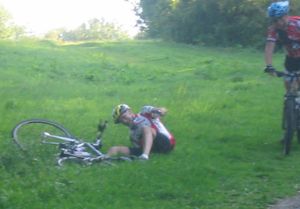