At the MSF UK office in Farringdon

Limited to 50 attendees via eventbrite, plus British Red Cross and MSF volunteers 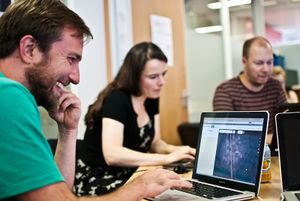 Technical problems experienced on the night to be recorded via a live, in room skype chat and then collated & reported via the github issue tracker

Problems with the event itself will be recorded here, along with learnings forn future events.

MSF AV manager will be filming for stock footage and also to recodrd people's feedback on the event.

All images and footage will be available to MSF, British Red Cross and Humanitarian OSM Team for comms and recruitment purposes.

50 'tickets' were released via eventbrite. All were accounted for. Ten were taken by MSF / HOT members and 40 by unknowns. There were a further 5 HOT / BRC members present who did not register. Potential attendance of 55 people.

5 unknowns emailed the day before to cancel, having received the email to attendees. 26 of the remaining 35 showed up on the night, plus 2 randoms.

There were 5 HOTties in attendance, so a rough ratio of 1:6 (HOTty/newbie). It was generally agreed that this was a little low.

Send an email to attendees two days before event to give people time to cancel and so you can readvertise places.

Ask helpers / HOTties not to sign up to eventbrite or equivalent. Instead, base target attendance on how many newbies you think you can accommodate.

--Nick Allen (talk) 14:49, 1 August 2014 (UTC) 1. HOTtis & helpers not to sign up, but we circulate by email prior to event so we know who to expect. Don't mention the word 'expert' - the help of a newcomer could be just as valuable because they know what hurdles they had to overcome, and how they did it.
2. Send a message to those who got tickets last time, before releasing to others. If they don't feel confident mapping yet, then let them come to as many sessions as they feel necessary - also they can help others out. We also need to establish a progression route, which could be something like, iD on first session, JOSM on 2nd, Field Papers on 3rd, Validating on 4th.........
3. Have 50 places available on eventbrite tickets (provided we haven't reached the safety level of the room(s);

The venue was adequate in terms of size (just). There were enough tables and chairs. There were a few worrying trailing cables for charging laptops. WIFI held up, but there were some problems with bottleneck - inconclusive whether this was the wifi or the satellite imagery site (Mapgive).

Directions and timings were sent 24 hours before the event by email and the vast majority of people showed up on time.

Attendees were asked to bring laptops and to notify Missing Maps if they couldn't. MSF UK provided eight laptops in case. Four people requested to borrow one in advance, but nine turned up without on the night.

Pizza went down very well. Subsidised by Real Man Pizza in Farringdon (highly recomended!)
--Nick Allen (talk) 15:01, 1 August 2014 (UTC) could do with some way of getting drinks to the HOTties - at least 2 of us were looking for a glass of water - non stop questions! Pizza had nearly all gone as well!

Check WIFI capacity (how do we measure this?)
--Nick Allen (talk) 15:01, 1 August 2014 (UTC) no evidence wifi was a problem - Derick was able to see that satellite imagery website was overloaded & throwing error messages - see my comment above. Ethernet cable connection not possible at MSF offices.
Really reinforce the fact that people need to bring laptops. Maybe through emails to attendees/twitter/facebook.
--Nick Allen (talk) 15:01, 1 August 2014 (UTC) Also mention a mouse - most people find it much, much easier with a mouse.

There were a fair amount of tech problems opn the night and some people didn't get started until they were an hour in. Often these problems were operating system specific (especially Mac)

Group people by operating system so that learning is done together, problems resolved quickly and en masse.

The intro was focused on JOSM as the editor of choice for the evening. However, those that borrowed MSF laptops had to use ID as the MSF IT guys don't allow new software to be downloaded willy nilly. It turns out that attendees in the JOSM room had a lot of problems getting started. The majority had done no mapping and even downloading JOSM proved problematic for many. In the other room, where only ID was available, the users were all mapping in minutes.

If people want to use JOSM, they should. But, newbies should start with ID. They can straight away get mapping and contributing. They should then be encouraged to download and try JOSM in their own time. This could be done in follow up communications or maybe at the event in a five minute demo at the end.
--Nick Allen (talk) 15:07, 1 August 2014 (UTC) Invite all who went to previous event's to come along to the next one - we need them to feel confident & we can offer progression. Yes, start anyone new with iD, but also offer JOSM. Even if some use it as a social event at which they map, it should provide more confidence. I don't have a problem with some people needing several sessions before they feel confident to map on their own - they could go on to be our best / most prolific mappers of the future.

Tasks were set according the the initiatives we were supporting: 2014 West Africa Ebola Response (586) and the Lesotho Mapathon (597 & 599). These were discussed and confirmed on the day of the event.

This worked well.
--Nick Allen (talk) 15:11, 1 August 2014 (UTC) In the last couple of days prior to the event, research the available projects, and have a list of at least 4, preferably 5 or 6 so we have spare, projects that are spread over the different imagery providers - spread the load on the evening & it should reduce the delays, even if it means taking tasks that are not as urgent - we need to train them in the available time.

The intro to the event and the talks at the beginning were really well received. Good length (about five minutes each). Two operational people giving context to the tasks attendees were about to contribute to.

The event did not start at 1800 as almost all the organisers were late! This meant that a lot of details got forgotten (name tags, problem logs, contact info).

The event finished on time, but the feeling was that people would have stayed longer.

Always try and have operational people in attendance to give context to the activities. Especially someone from (or whop has worked in) the country being mapped.

Make the event longer. It was felt that 1800 - 2100 would have been better. With 50 people mapping this would mean an extra 25 hours of mapping time!

There were posters provided by British Red Cross, but aside from that not much in the way of resources. People asked to have crib sheets provided on each table. Also, name tags, stating what the person's role was were planned but late organisation meant that it never happened.

Make name tags a priority - means attendees can quickly identify who they can go to for help!