OpenStreetMap offers an online map and spatial database that is updated by the minute. Various online maps are based on OpenStreetMap, including Navigation tools such as OSRM. Tools and services allow data extracts for GIS specialists, routable data for Garmin GPS, GPS navigation with smartphones and other device-compatible downloads. With an Internet connection, regular syncing is possible, because there is open access to the community-contributed data as it comes in. Also bulk with downloads of OpenStreetMap data are ideal for use offline. In addition, maps can be printed to paper, if needed.

Browse the Activation Area to get a feel for the data that is currently available. Different map styles, including a special Humanitarian style, can be selected on the right side of the screen. Though some data may not render (appear) on the online map, it can be exported from the underlying database for other uses requiring more detail(See export section below).

Large poster-size maps and letter-size paper atlases of custom areas can be printed: 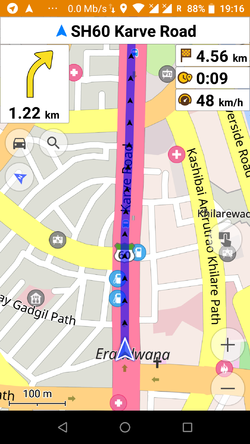 Both Online tiles and Offline vectorial tiles are available through OSMand. Using the Offline maps stored on the phone, you dont need access to any mobile network. While using the online option, you should verify how much data is downloaded.

Custom Exports (to be rerun at any time)

See Downloading data for instructions on getting large scale map data. See Shapefiles if you need this format to export to GIS tools.

With the availability of small communication devices, Offline data for navigation proves to be very useful for humanitarians deployed in foreign countries. We support the humanitarian NGOs using navigation data and invite them to give us feedback on the use of these devices in the context of field deployment. Daily updates assure that the most up-to-date data is available for downloads. With limited communication in a disaster region, it is recommended that users download data in bulk before traveling to these regions for offline use.

With OSMAnd, you can notify the OSM mappers of problems with the map.

The bugs will appear on the map, and will be handled when a mapper sees them. The mapper will try to correct the error using your message and the aerial pictures available. Please don't ask questions, as we will probably not be able to answer them. But please describe what's wrong and how it should be.

After a mapper handles (and hopefully solves) the bug, the correction will be available the next time you download the maps.

Use of OSM data for Humanitarian Missions

Zones not yet covered

Humanitarians that operate in the area may discover areas not yet mapped in detail, They can contact us via the HOT discussion list.

About This Humanitarian Activation

History of this Activation

OSM developers communicate over the Internet through various communication channels. In 2013 they implemented the new Humanitarian Map Style, a map more adapted to humanitarian actions. This map, hosted by OpenStreetMap of France, is integrated into various online map tools.

Two OpenStreetMap tools, the Tasking Manager and the JOSM editor, are essential parts of this activation. As new imagery is available, new jobs are added to the Tasking Manager. This tool has allowed HOT to coordinate efforts of mappers around the world. Some days there were more then 200 simultaneous mappers registered on the Task Manager and editing, mainly with the JOSM editor. Other online editors, such as OSM's ID and Potlatch 2 editors, also are used for less-intensive mapping. LearnOSM.org offers material to instruct beginners and more advanced mappers in these editors.

Andrew Buck and Pierre Beland are coordinating this activation. The request for activation first came from Médecins Sans Frontières (Doctors Without Borders). The HOT team coordinates with CartONG, American Red Cross, UN-WHO, UN-OCHA and the Digital Humanitarian Network. This coordination contributes to a quicker and more-efficient response, and assures that a range of map products and services are offered to the humanitarian organizations that operate in the region.

Jean-Guilhem Cailton is supporting imagery processing, and TMS server. User:russdeffner assisted in the coordination by creating and updating this wiki page on behalf of the coordinator team, now a team effort.

News about this activation for Ebola

In some parts of the world, OSM members are organizing "mapathons," events where mappers gather to learn about mapping and to tackle specific map tasks. Mapathons give members an opportunity to meet-like minded mappers and to learn how to contribute to OpenStreetMap. Other mapathons are more generic, not focusing on specific tasks or crises, but providing a shared experience of mapping while improving mapping skills.

Upcoming events are listed below. Please indicate date, group and location of the mapathon. Link to more details for these events.

Statistics about the Ebola Effort

The humanitarian workers operating in West Africa are facing a very difficult and stressful context. To respond adequately to this epidemic, they need detailed maps of the region. The OpenStreetMap community has accepted this responsibility, and, by the beginning of August 2014, more then 700 contributors from around the world had contributed, digitizing information from aerial imagery. locating villages, adding names to identify those villages, and tracing roads and buildings.

This activation has been in two phases. At the end of March 2014, three cities in Guinea were mapped rapidly. Later coverage was extended to areas in Sierra Leone and Liberia, close to the Gueckedou area in Guinea. With the extension of the epidemic at the end of June, HOT reactivated to respond to the increasing needs of the humanitarian field workers on the ground.

The table below shows the growth of both the number of OSM contributors and the number of modifications of objects in the OSM database since the beginning of this activation.

By the beginning of May 2014 478 contributors had participated and 2.2 million objects had been modified or created in the OSM database.

By the 8th of August, the effort passed 5 million objects modified and more than 8,000 places. There were 449,743 buildings traced. Note that 8,296 of these buildings are represented by a simple node because the imagery for these zones is not detailed enough to show the outlines of the buildings. This contribution was made possible by the work of 840 volunteers around the world participating remotely through the Internet. 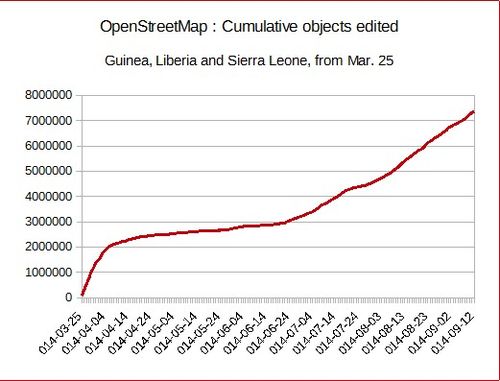 1POIs do not include nodes with place and building tags.
2By Sept. 1, there were 11,769 buildings represented as nodes because the imagery in some areas is not detailed enough to trace the outlines of buildings. These are included in this building statistic.

The statistics on contributor activity take account of nodes, ways and relations that were created, modified or deleted.

The net effect of these contributions on the OpenStreetMap database is remarkable. In comparison with the OSMPlanet of early 2013, the net effect on the map as of August 15 for Guinea, Liberia and Sierra Leone is :

How OSM products and services are used by the humanitarians

This section is to show various examples of OSM usage by the humanitarians organizations to organize aid, distribute goods, track cases. Please share stories from humanitarian teams and software developpers. Link below to studies, blog updates and softwares.

How You Can Contribute 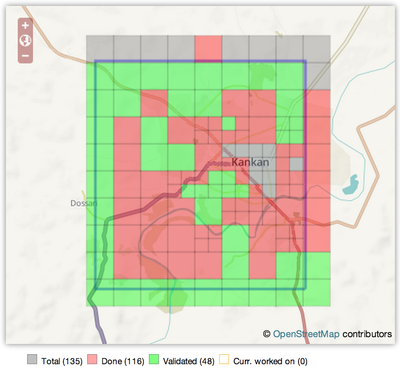 Beyond these, we need experienced mappers to make assessments of missing data on a wider scale. Fix up of place names is needed. There are several old topographic maps of this area with lots of place names listed on them and possibly alternate spellings as well.

Below are video tutorials of the various steps to do GNS Imports using JOSM.

This YouTube playlist covers configuration of JOSM for doing GNS Name Import tasks and shows the basics of getting started and how to merge name nodes into OSM. You can watch them all in order or just skip around for any that look helpful.

Bing has greatly extended his imagery coverage over the last two years. But for the Ebola outbreak, their high-resolution imagery was not available for the three main towns we need to cover and the adjacent regions. The group CartoNG has purchased imagery on behalf of MSF-Switzerland for the three largest towns in the region. Task Manager jobs have been created for these towns, and they were mapped in 20 hours by our contributors, coordinating through the Task Manager.

Our secondary priority was to trace roads and locations of villages in the wider region. We started with a Landsat 8 image taken the 23rd of March. We also had some scattered Orbview 3 (from around 1990) for a very limited region.

Higher-resolution imagery was later obtained for free by Jean-Guilhem Cailton from Airbus Defence & Space. A new program by Mapbox/DigitalGlobe to offer free imagery to OSM also came to the rescue.

Bing is the 'default' Imagery available for OSM (default option in most editors). The Bing imagery coverage is not complete for the Activation area, and alternative imagery sources are provided in the Task Manager Jobs, and described below.

These Landsat 8 layers were put online by Jean-Guilhem Cailton on OpenStreetMap-France server and show natural color in the "432" image and a traditional "false color" image in the 753 layer listed below:

"Airbus D&S has offered two Spot-6 images, with 1.5 m resolution, covering the areas around Kenema and Kailahun. They are available in "natural colors," and also with a near-infrared band (NIR), in these TMS layers (that also include the Spot-6 images that were previously offered):

These are URLs for JOSM, and you must accept the Astrium / OSM license (http://tasks.hotosm.org/license/6) before accessing them. Use source=Spot-6, Airbus

They can be used (along with other imagery sources) for the current priority need to locate villages and hamlets, and access roads and tracks, in the District of Kenema.

And also to complete these elements (settlements and access roads) in the area between Kailahun and Koindu where Bing is obscured by clouds.

0.5 m resolution images should be available soon to map the buildings in the towns of Daru and Kenema, which have lower priority."

How people can help, republished by various medias