The early versions of mkgmap would just omit any non-ascii character. Starting with releases greater than 116 things are a lot better.

I am fairly sure that my Legend Cx can display characters from 8859-1 but not from say the Czech or Polish alphabets. It may well be the case that units purchased in different countries have different character sets however.

Please add information about your GPS to the following table so we can build up a picture of what is available. 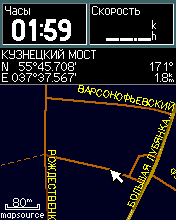 Its quite exciting that we now have some support for the first non-roman alphabet.

With no special options, the Russian Cyrillic letters will be transliterated into ascii characters, meaning no more names will show up rather than being blank or question marks.

For devices that display cyrillic characters (and only a few do, or when firmware mods are applied) you can use the --charset=windows-1251 option.

There is more to do, and help is needed, for example the non-Russian Cyrillic letters. The same technique could be used with any character set that is capable of being transliterated without extra information. Latin1 and Latin2 are already done that way. Please see the Talk:Mkgmap/i18n page for some history. 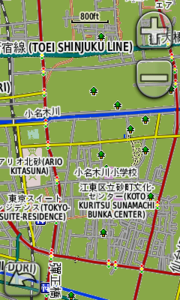 Some models (nüvi, Oregon, others?) can display Japanese characters with updated fonts. 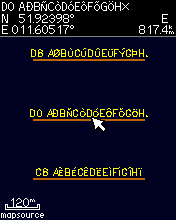 You can investigate the 8 bit labels of the Garmin .img format, by downloading this test map. If you go to Lat,Long of 51.9,11.6 you should see some streets a bit like in the image to the right. The capital letters A, B, C etc are just markers for the characters in between. The hex number at the beginning of the 'road name' is the first character after the 'A'.

From the picture you can see that the character with code 0xCB is È on the Legend Cx.