This page about Node Networks describes the current practice in the Netherlands. Other communities may, and probably will, have different practices. Node Network mapping is still very much in development. History and reasoning behind choices are described to help people make up their minds about these matters.

What is a node network?

A node network consists of numbered junctions called nodes, and routes interconnecting the nodes. On the road, every node is marked with its number, and it has pointers to adjacent nodes in different directions. In between the nodes, the route is waymarked in both directions with arrows, often without numbers.

Node networks are mainly used for recreational purposes. One finds an area of interest, plans a trip within the network, and writes or prints a list of numbers to follow. Of course, this process is increasingly digitized with planner sites, planner apps, gpx output, rendering apps and navigation apps.

Variants include letters or codes instead of numbers, or different colour markings on the node2node routes. This makes no difference when planning a longer route using the node network. Planned routes in the end consist of a chain of numbers or codes to follow.

A particular variant uses coloured routes to connect the network nodes. On the road, you cannot choose the next number, you choose which colour to follow. The planned route has to add this colour information to the user output.

Waymarking on the road may differ between regions, and may require some getting used to when following the routes on the road. Many cycle networks use separate shields for the node2node route waymarking, where walking networks often use simple stickers and small shields combined on shield posts. Some give the next node number on every shield, some just use an arrow or shield without a number. In Germany, many operators have integrated all waymarking and direction-pointing systems in one system of numbered signposts and shields for all purposes.

The pictures above shows a style using metal shields, where the colour, size and an icon indicate cycling or hiking, and the shields show the direction and the node number you will reach next. The boat node example shows the use of colours to differentiate between the types of boat.

Node networks are maintained on the road by various (and often changing) operators. Most operators have their own network maps and sometimes a planner site or app. OSM uses the nodes and routes as found on the road and in the field. In The Netherlands, mappers are allowed to use the Wandelnet node route planner https://wandelnet.routemaker.nl/routeplanner/wandelen as a source.

Survey is of course the most valuable source. Other sources may help. Operators may provide their data as open data (Odbl, CC-BY-SA or comparable). This allows mappers to use that information for OSM. In The Netherlands, mappers are allowed to use the Wandelnet node route planner https://wandelnet.routemaker.nl/routeplanner/wandelen as a source. Both the Wandelnet data and OSM are (2020) well underway to complete coverage for the Netherlands.

Node networks started out as separate cycling networks in Belgium and The Netherlands. Later different networks interconnected and the system was applied to walking. Nowadays, for cycling and walking in the Netherlands the whole country is evolving into one big node network, and other countries follow this development. Also node networks for horse riding, motorboat, canoe and inline skating are being rolled out.

The basics of OSM-tagging of node networks came from a discussion on talk-nl in September 2008, and it was fleshed out in the months after that. Since then, many things have changed but the basic system is the same. See (Cycle node tagging). This development is still going on.

This page gives the reasoning and the essentials for all node networks. Details for a particular type of node network can be found on various tagging pages. Variations and rules for particular countries may exist and should be described on the localized pages.

Tagging is based on the following real-world observations:

The objective is to make the node networks routable and planner-ready, and renderable as special networks, different than regular cycling, hiking, horse, canoe, motorboot and inline skate routes. So we are building a model for data use, while staying as close to the real world as possible. This can be compared to the way roads are mapped and connected as linear features to enable routing, while in reality they are areas.

The system should also be scalable to cope with the possibly very large number of elements involved.

This was achieved as follows:

Integrity and maintenance of the OSM network representation

Knooppuntnet has been designed to perform extensive checking on a node networks and node network elements. The results are presented by network as "facts" with direct edit links to OSM and JOSM.

In addition to the regular tagging above, extra tagging can optionally be used for very tight maintenance. This includes:

Although in theory node networks could be defined at local, regional, national and international scale, currently all node networks are still defined as regional (network=rXn). In this tagging instruction we will assume regional scope, and use c for cycling to explain the tagging. For other transport types, use w for walking, h for horse, p for paddling (canoe), i for inline skating instead of c for cycling, in these tags:

The node you tag does not represent the physical feature (pole or post) but the intersection of the ways making up the node2node route relations. In other words, the junction node is the intersection node that the routes "land" on. This node links two routes together when planning a trip over the node network.

All numbered junction nodes in the node network are tagged:

The routes that make up the network are part of a type=route relation:

One relation for each (named) node network is created. This relation holds and describes all elements of the network.

Routes connecting to a node in another network get a role=connection role in both network relations.

If a junction node is in two networks, which can happen in border areas, it is added to both network relations with a role=connection role.

Sometimes two nodes close to each other have the same node number. The provider considers those to be one logical network node. Usually, but not always, the split nodes are within visual range of each other, for example, at both sides of a bridge.

In this case, as a rule* we simply treat the split node as separate nodes which happen to have the same number. The nodes are interconnected by a short node2node route which happens to connect two nodes with equal numbers. The routes land on the first node they "see". Routing, planning, rendering and checking applications can handle this, because the actual numbers do not make a difference in handling.

When there is no split node but two of the routes use the same road for a stretch, it is allowed that this common section is entered into both route relations.

Complicated junctions and roundabouts may even have three or more split nodes. The general rule for most routes* is: put a network node at the intersections where there is a choice. Then connect the nodes where necessary with short interconnection routes. You are allowed to use short interconnection routes with multiple nodes with the same number. In most cases, the logical split nodes will more or less coincide with the positions of the actual node posts. Then let each routes land on the first node it "sees".

Bicycle node routes often have split sections, where the low to high direction (Lo2Hi) uses different ways than the high to low (Hi2Lo) direction. All the ways (common, Lo2Hi and Hi2Lo) are entered into one relation. The common ways are entered without a role; the split ways for either Lo2Hi or Hi2Lo are entered with a role (forward or backward).

For the chain of ways, only the fact that there is a role counts.

The roles forward and backward are assigned wit respect to the drawing direction of the way in OSM. If you cycle in the same direction as the way, it's forward. If you cycle against the drawing direction, it's backward. That is why most of the roles will be forward both for both directions. https://wiki.openstreetmap.org/wiki/Forward_%26_backward,_left_%26_right explains the terms forward and backward for OSM.

NB. To see and do this properly, you need to use JOSM and its relation editor. It shows the Lo2Hi and Hi2Lo chains and the way directions in its continuity line. This description assumes you use the JOSM relation editor.

Basic Tagging Recap: Split in the middle, common ends; the route lands on single junction nodes at both ends 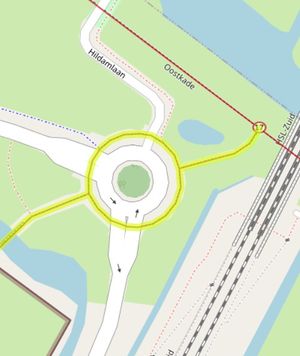 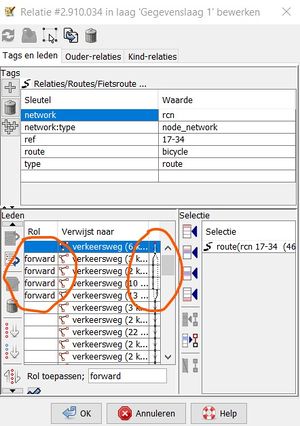 We now consider one end of the node2node route, landing at the high node on a highway junction with two node poles for one logic network node: one pole for each direction. The crossing highway is a simple road and has no difference between back and forth. This is quite common. Somewhere near the junction, the route splits. One direction lands on one node pole, the other direction starts from the other node pole. The other node2node routes are simple routes to both ends of the crossing road.

Methods a (Closed loop method) and b (Cluster method) are equal for rendering and routing, and both pass all consistency checks. 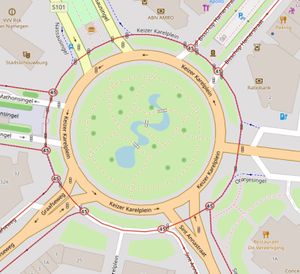 Bicycle Roundabout with 8 nodes for 4 split routes
We now consider a roundabout with two-way cycleways all around. Four roads with oneway cycleways at both sides land on / leave from the roundabout. There are cycle node poles at all landing/leaving points, all carrying the same node number. Of course, all directions of all routes need to have either direct or indirect connections to all the other routes (and to themselves), for visual display and for routing purposes.
Complicated? Don't worry, it's easier than it looks, once you have mastered the branch tagging. Just pick one of the following methods, both will get you there!
Closed loop method: closed loop route relations contain the roundabout sections
Every section of the roundabout is now a member of 3 or 4 route relations. This is alright.
Cluster method: split end routes; the whole roundabout is a separate route relation.
Every section of the roundabout is now a separate member of the cluster relation. This is alright.