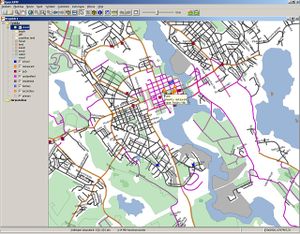 OpenJUMP is a desktop GIS software, written in Java, developed primarily in Canada. Like many "GIS" systems, it's all about working with Shapefiles, but it also has native support for PostGIS databases.

How to import OSM data

As of Aug 8, 2013, OpenJUMP PLUS 1.6.4 (OpenJUMP Snapshot Revision Nr. R3639+) contains an *.osm file reader. The reader can also downloaded separately from here. However, to work with OSM data, you could also download Shapefiles created from OSM. For more flexibility however you may prefer to import OSM data into PostGIS as described below. It is not possible to write OSM data with OpenJUMP. Since the iD editor is a much better web-tools to create OSM maps.

A tutorial on how to use OpenJUMP with OSM data can be found here:

Everything will be automatic after that and the result is ready-to-use PostGIS tables '_point', '_line' and '_polygon' containing OSM data. The more data there are to import, the longer it takes. Some estimate is that with a standard laptop osm2pgsql used in the slim mode can import about 80 GB of bz2 compressed OSM data per hour.

Read the data into OpenJUMP

OpenJUMP has native support for PostGIS. All you need is to define the datastore, that is to give server, post, dbname etc. so that OpenJUMP knows how to connect. After that all PostGIS layers in that database are selectable. And not only that, they are queryable too. So you can tell OpenJUMP to read in line data WHERE highway='secondary' and you know what you will get :) Or from the point data WHERE shop='supermarket', and you will get the supermarkets which are not drawn in the default Mapnik or Osmarender maps.