We suspect that the Prototype Global Shoreline (PGS) coastlines may not correlate exactly with other data sources. This page is for gathering our findings.

Following are three plots of shifted vs unshifted PGS data from three parts of the Isle of Amager.

In the above examples I have on purpose used both harbour areas, beach areas, and landfilled areas, to rule out tide information. The first image shows the quays of the oil and gas offloading part of Copenhagen Harbour, the second plot image shows the beach area at the south of the isle and the third image shows a landfilled bridge supporting island and part of the old harbour entrance.

They show the PGS data as being 1 arcsecond south and 1 arcsecond east of the actual coastline, at least for the Copenhagen area. This was verified against the municipal geodata from KMS, and again against the Digital Globe 2006 imagery employed by Google Maps as seen in the above images.

The question is if that is the case for all of the data, or if it is a projection issue. Further investigation in other areas of the OSM world is necessary to discertain that. 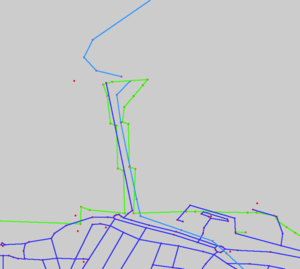 Note, the area to the right of the pier, where roads appear to be in the sea, is in fact an area of land reclaimed a few years ago for an ice rink, and a harbour. Depending on when the source data for PGS was taken this may well have not existed at the time.

Ah, the area was reclaimed prior to that. 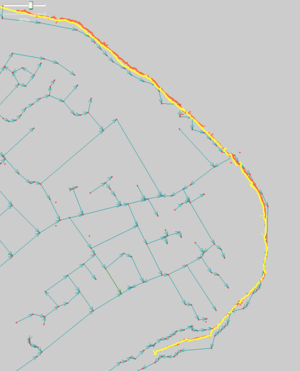 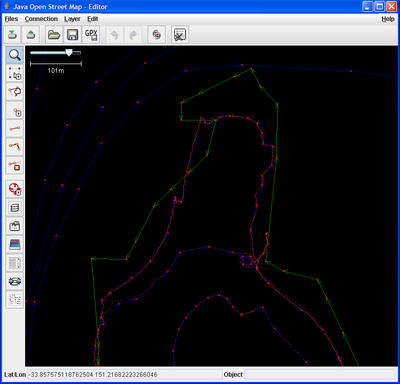 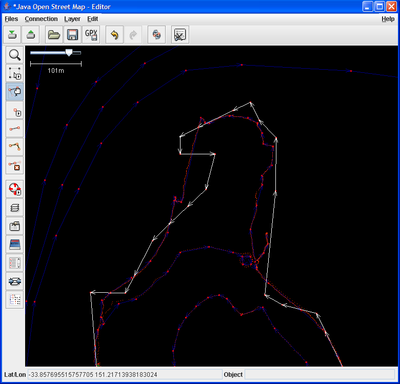 I walked the perimeter of Sydney Opera House a couple of months ago. This is a very well defined bit of coastline with, AFAIK, no tidal variation. These two images show the PGS data (green) overlayed on my tracklogs (red). The white outline in the second image shows the PGS best-fit. This is the result of a shift due south by about 60m (according to the JOSM scale indicator).

This reinforces the observation that the PGS data is shifted, but it is also interesting to note that there are other, more random, inaccuracies in the data that are of the same magnitude.