Many ideas described here are present at https://www.openstreetmap.org/

OSM has many advantages compared to commercial maps. But the usage of our data is heavily made difficult because of unneccesary complicated applications. Different tools are spread through dozens of pages and even the initiated don't know every trick and tool.

The User Offensive is explicitly addressed to users of maps, that do not necessarily want to help or can help. A clearly arranged and multifunctional portal should be created especially for viewing and using the map. It should not only be a mere representation of the map like on the startpage but an abstract of many projects around OSM, that address the user directly.

The usability has the highest priority on this project. The portal should offer the easy and simple usage of our data. The portal should have the capacity to search for a point, offering routing service, view extended data and even print atlases or export parts of the map for the own homepage.

The aim is the creation of a modular portal as a competition to the established Google Maps. The functions should be extended step by step. For this purpose primary, secondary and tertiary functions are distinguished.

Appearance and Concept of Usage 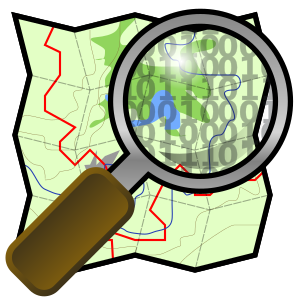 The User Interface is split up in the following areas:

I sat down and tried to pack the above in a website draft. Everything can be viewed as concept and I am very criticizable :)

The different elements should be single and being able to swing out for not disturbing the representation of the map.

How that looks one can see on the first picture 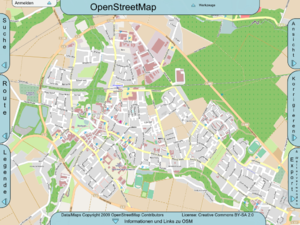 all elements swang in
. 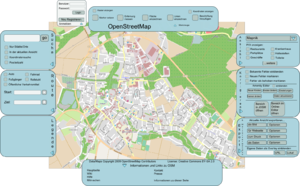 The draft can be downloaded here [1] as SVG.

Nearly all elements are existent in the used form, but are strewed about different pages. (for example Openstreetbrowser, POI Map or Amenity Editor)

Note: this draft should serve as an impulsion and motivation and delimit ideas. I am not a programmer and am not able to implement the proposed. Nevertheless I will try to contribute my part because i think that a frontend that combines the most important functions and doesn't need much documentation could be very helpful for the acceptance of the project. --torstiko 09:08, 17 September 2009 (UTC) 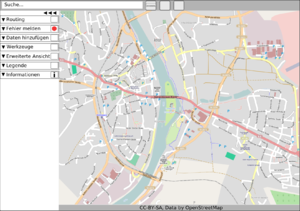 I sometimes dealt jobrelated with questions like this and conceptualized both of these map-sites: MaptheQ (Qype-points in europe on one map) and Österreichkarte (touristic information on one map). Maybe this could be useful as an inspiration. --Helge.at 14:00, 22 September 2009 (UTC)