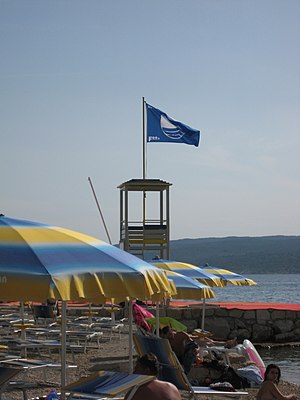 As proposed on the tagging mailing list in june 2012 by Janko Mihelić: The Blue Flag is a voluntary eco-label awarded to 3849 beaches and marinas in 46 countries across Europe, South Africa, Morocco, Tunisia, New Zealand, Brazil, Canada and the Caribbean. More about it here: http://www.blueflag.org I suggest a "fee_blue_flag=yes" tag which should be used in combination with "leisure=beach_resort" or "leisure=marina". This could be useful for easy searching of well equipped, maintained and clean beaches and marinas for tourists.

Tagging beaches and marinas awarded with the blue flag.

The blue flag is awarded by Foundation for Environmental Education (FEE), as presented on the page http://www.blueflag.org. See also blue flag beach on wikipedia.

Beaches and marinas awarded with the blue flag have requirements on holding a certain level of service and quality. These places should be in a travellers interest to find.

All the beaches in Varazzi have the blue flag: On the official site, for Varazze they say:

Added to existing features describing bathing waters or marinas. Such features are known to be tagged with leisure=beach, leisure=beach_resort, leisure=marina, harbour:type=marina.

It should be enough with one tagging for each of the FEE-approved sites,[1], on the most appropriate feature. Make sure that the feature tagged also is tagged with a name correspondning to the one given by FEE.

The result of the voting was five votes of approval and two vote against. The votes against stressed the importance of having a more systematic approach.

As response to the wishes for a more systematic approach, a new proposal have been made at Proposed features/Beach and bathing water quality