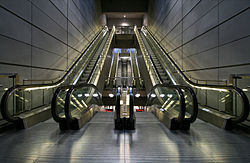 This page proposes tags for the two most common types of conveyor transport for persons: escalators and moving walkways.

An escalator is a moving staircase – a conveyor transport device for carrying people between floors of a building.

The conveying key is used together with highway=steps (for escalators) or highway=footway (for moving walkways).

Model each stairway/escalator as own way.

These could be used for tagging escalators and moving walkways, but they are not part of the proposal.

Nope, it's not enough. The description says "unspecified direction". That is clearly not the same as "moving in both directions".--Extremecarver 09:11, 3 September 2012 (BST)

We *currently* don't map lanes as separate keys on highways, but hopefully, we will be able to do so in the future. Also, the comparison is weak: Highways are several meters wide, the lanes are just part of the highway. Escalators are under 2m wide usually, two escalators are usually two distinct features and 2m do matter more in pedestrian/indoor routing/maps than they do for car applications. -- Errt 13:57, 1 September 2012 (BST)

Hopefully in future we are able to map lanes using separate keys. So how comes we want to start here to map it with separate ways. I disagree. If there are 2 escalators moving in opposite direction, I don't see why we should map them separately. This is just false precision. I doubt we ever have sub 2m accuracy in OSM underground.--Extremecarver 09:11, 3 September 2012 (BST)

The proposal mentions that you can use the Lanes concept with the conveying key. Unlike your suggested solution conveying=both, this a) works for conveyors that have normal steps between or next to them, b) defines which direction is on the left/right and c) lets you add other tags such as width=* to the lanes. An example has been mentioned on the talk page. --Tordanik 09:29, 3 September 2012 (BST)

If this is the case you should remove the note "Model each stairway/escalator as own way." because you simply can model many stairways with only one way and :lanes-tags. --Imagic 07:39, 4 September 2012 (BST)