Currently, apart for harbours and maritime tagging, logistic inland facilities are tagged most of the times as industrial areas. This previous attempt was rejected and unclear. 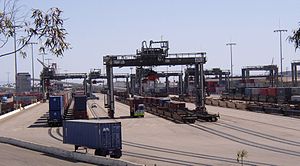 An intermodal terminal is an industrial area where it's possible to move goods onto different transportation modes. Mainly the area is accessible by rail (a rail yard with multiple tracks is inside the area) and by truck (multiple gates allow the check in / check out of trucks). Inside the area there is space for storing goods (warehouses) and containers (areas used as depot where containers are stacked); other facilities include offices and other business-enabling facilities.

All the area belonging to the terminal should be enclosed and tagged with man_made=intermodal_terminal (could be combined with landuse=industrial).

For further detail single warehouses rails and gated could be mapped.

If a terminal consists of an area and additional linear features (rails), man_made may be more appropriate, but you'll need to put them into a collecting relation like type=collection or type=site. These relations are controversial and are therefore ignored by most applications. --Fkv (talk) 10:14, 19 July 2014 (UTC)

I thought to ask you all to give comment on the change to use this vote as valid one... I'll ask on the list before accepting the new variation --Sarchittuorg (talk) 09:40, 19 July 2014 (UTC)

As the voting feedback is conflicting, I am thinking on moving to use the old existing tag in industrial key space, to follow also this proposal http://wiki.openstreetmap.org/wiki/Proposed_features/industrial