The key and values proposed here have already been included in Map Features on grounds of widespread use (over 80 thousand uses). This proposal has thus become obsoleted. 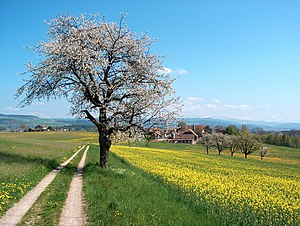 All the tracks are currently all the same. Therefore nearly everything I add is just called track. I think this is very vage, so I am proposing there is different grades of track. I have tagged a lot of my tracks in the following way, so am seeing if this can become standadised...

I propose that the tracks should appear the same as unclassified roads, being white with an outline, but the outline should be a fainter grey, the further down the list it is. This will then make the more visible tracks on a map, the more visible tracks in the field. Also in looking at the map, you will then pick out the stronger tracks to aim for.

I will try and get some images of examples of each track type to make it easier, but there is a huge difference between all these, and just calling them highway=track, is way too vage. Ben. 02:57, 29 Sept 2006 (BST) (Updated, 8th Novemeber)

Having a tracktype tag attached to something should be used instead of the highway=track tag. This way, highway=footway, for example, may be attached to the same way, and the footway will lay on top of the tracktype. The Highway tag should be used to define the legal access rights of a way, while the tracktype can define the physical properties of the way. Highway=track should be unneeded, although highway=unsurfaced may still be needed for ways that are open to traffic without being classified as a byway. Ben. 00:55, 8th Nov 2006 (DST) 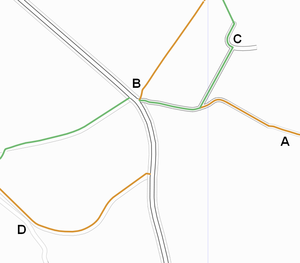