Currently closest way for mapping hollow ways is to use tag cutting=yes in combination with suitable highway=* tag.

This proposal is coordinated by user Kslotte with approval from author. 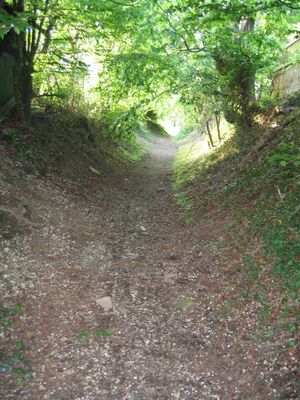 A hollow way or sunken lane is a "road which has over time fallen significantly lower than the land on either side".

This proposal suggests to tag the sunken parts of a way (usually with highway=*) with historic=hollow_way. It applies to both used and unused highways.

An alternative suggested that emerged in the discussion is to expand cutting=* to allow cutting=hollow_way for this kind of way.

Currently closest way for mapping is to use tag cutting=yes.

Like alleys with old trees, these forgotten hollow lanes are abandoned, although used for centuries because they are not suitable for modern transportation (hunting and forestry). These cultural assets can become alive with OpenStreetMap.

The earth banks on either side, sometimes topped with hedges and trees, give the impression of a tunnel enclosing the traveller. Because the roadway is restricted by the banks on either side, sunken lanes typically admit the passage of only one vehicle; that is, they are single track roads. Occasional passing places may be provided, but a meeting of vehicles in a sunken lane often requires one party to reverse to a suitable passing place. In central Germany, "dual carriageways" have been observed with two trenches side by side where a trackway was in such heavy use that it had lanes dedicated for each direction.

Up to the present day, some writers have assumed that low banks were deliberately created with shovels as a means to hem in cattle, but there is no evidence for this, and in any case, banking only appears intermittently in certain types of soil. In recent time, they became too narrow and were abondened or got a bypass.