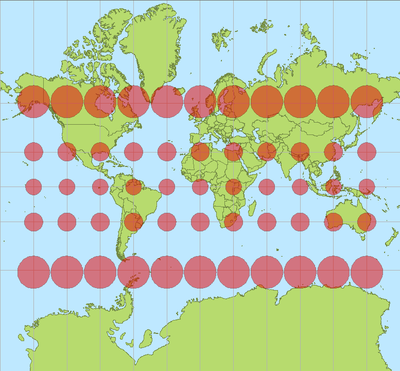 Variation with latitude of represented distances (in degrees or pixels) on the Mercator projection per actual distances (in meters) on Earth surface.

The horizontal distance represented by each square tile, measured along the parallel at a given latitude, is given by:

As tiles are 256-pixels wide, the horizontal distance represented by one pixel is:

Make sure your calculator is in degrees mode, unless you want to express latitude in radians for some reason. C should be expressed in whatever scale unit you're interested in (miles, meters, feet, smoots, whatever).

This formula assumes that the Earth is perfectly spheric, but since the Earth is actually ellipsoidal there will be a slight error in this calculation, which does not take into account the flattening (with a slight reduction of radius for the best-fitting sphere passing at geographic poles at average sea level). But this error is very slight: it is null on the reference Equator, then grows to an absolute maximum of 0.3% at median latitudes, then shrinks back to zero at high latitudes towards poles.

The error also does not take into account additional differences caused by variation of the altitude on ground, or by the irregular variations of the geographic polar axis, and other errors caused by celestial tidal effects and climatic effects on the average sea level, or by continent drifts, major earthquakes, and magmatic flows below the crust).

Mapbox GL–based libraries uses 512×512-pixel tiles by default, so Mapbox GL zoom levels are one fewer than the zoom levels described above that are used by other tools.