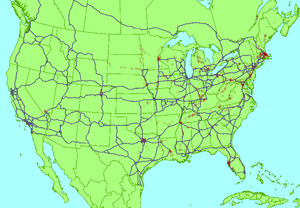 The "250 cities" concept was a project to connect the major cities in the USA and therefore to be able to route between them. It was initiated by Gravitystorm and with various tools being run by the old CloudMade team in London (no longer)

The aim was to provide a solid backbone of inter-city connections as the start of a major program to improve routing in the US.

These are no longer maintained.

We take the biggest 250 cities in the US, and using CloudMade's routing engine generate pairs between them. This info is then munged into a giant 17Mb HTML table, the /routing grid, with links off to the routes and cities so that you can inspect them.

It took six weeks for everyone to get stuck in a make all 250 cities rout-able. In a second phase, this analysis was refined to show "tortuous" routes. Routes which look suspiciously long.

The above challenges were pretty successful. They're no longer maintained, but they served as inspiration for some other progress tracking tools:

This analysis attempts to weed out the last of the connectivity problems on U.S. interstates, by checking that the ways can be chained end-to-end correctly. It also reveals a lot of problems with 'ref' tags. Check it out, and help with fixing!

This is a worldwide display of ALL duplicate node issues, not just highways. The U.S. remains the centre of duplicate node mess, due to the TIGER data, but there's some progress at fixing it all. 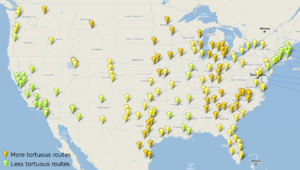 The tortuous routes map shows yellow connections. It shows which of the connections look suspiciously long ( >1.5 times the great circle distance). It's a crude fuzzy indication, but reveals some interesting patterns. 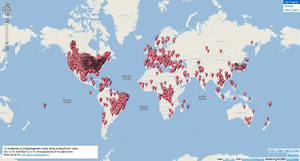 The duplicate motorway nodes map shows nothing left to fix in the U.S.! 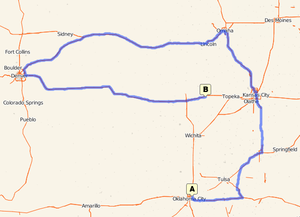 Sure, a green route isn't necessarily the correct route, but that's another issue
Retrieved from "https://wiki.openstreetmap.org/w/index.php?title=TIGER_fixup/250_cities&oldid=1487877"
Categories: