From OpenStreetMap Wiki
Jump to navigation Jump to search
Tag:building=ger - Other languages

yurt is a portable, round tent used as a temporary or permanent dwelling.

Traditional yurts and gers are covered with skins or felt and used as a dwelling by nomadic groups in Central Asia.

Modern yurts may be permanently built on a wooden platform; they may use modern materials such as steam-bent wooden framing or metal framing, canvas or tarpaulin, plexiglas, wire rope, and radiant insulation.

In OpenStreetMap only permanently or seasonally stationary tents, yurts and gers should be mapped.

Whilst yurt is the term most widely used in english, ger is the Mongolian word and these are a prominent aspect of urban places like Ulaanbaatar. Ger was in use earlier and has much higher level of usage (see taghistory. 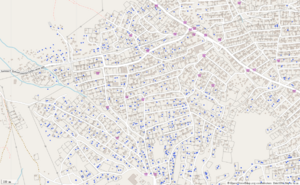 Draw an area marking this feature. Tag with building=ger.

It is also OK to set a node at its center, if mapping as area is impossible and someone really wants to mark individual object.

A tourism yurt
LOADING TAG LIST... (If you do not see this tag list, you need to enable Javascript)
This table is auto-generated. See Template:Taglist for a documentation on it.