From OpenStreetMap Wiki
Jump to navigation Jump to search
Tag:generator:type=combined cycle - Other languages

In electric power generation a

combined cycle is an assembly of heat engines that work in tandem from the same source of heat, converting it into mechanical energy, which in turn usually drives electrical generators. The principle is that after completing its cycle (in the first engine), the working fluid of the first heat engine is still low enough in its Entropy that a second subsequent heat engine may extract energy from the waste heat (energy) of the working fluid of the first engine. By combining these multiple streams of work upon a single mechanical shaft turning an electric generator, the overall net efficiency of the system may be increased by 50 – 60 percent. 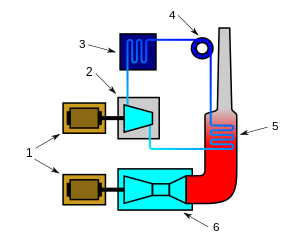