From OpenStreetMap Wiki
Jump to navigation Jump to search
Tag:power=circuit - Other languages

This page describes a proposed tagging that is waiting to be reviewed. This documentation was created because power=circuit relations begin to be well used and mappers may look for up to date explanations. Always refer to proposal.

Here are the two main point of view which had been expressed on OSM so far. The first one is in favour of type=route + route=power to map circuits since the power exchange is not so different of public transportation networks. The second aim to totally distinguish power routes and transport routes and gives a brand new tagging model.

Power line routes are not similar to transportation routes. Power lines have exactly two end point and have no "stops" in the middle. The beginning and the end (source and consumer of energy) of the line may exchange sometimes (e.g. in case of emergency switching). A power line may have T-shape connection to another one, but it is not an intermediate stop, it is a beginning of the other line. Also there are no travelling things like buses, passengers or travellers as in "common" routes. A travelling of electrons is rather physical abstraction, and it is not so simple as "small moving balls".

The relation for power circuits must be able, ideally, to tag splitting of phases to individual towers and gathering of them together; T-shaped circuits connections; supporting structures when part of wire does not transmit electricity but only acts as a holding device.

A relation of this type collects power line ways that constitute the same power circuit, with the same electrical characteristics, name, and reference mark.

The following drawing illustrates a connection of the substation "H" with two other substations: "K" and "T". 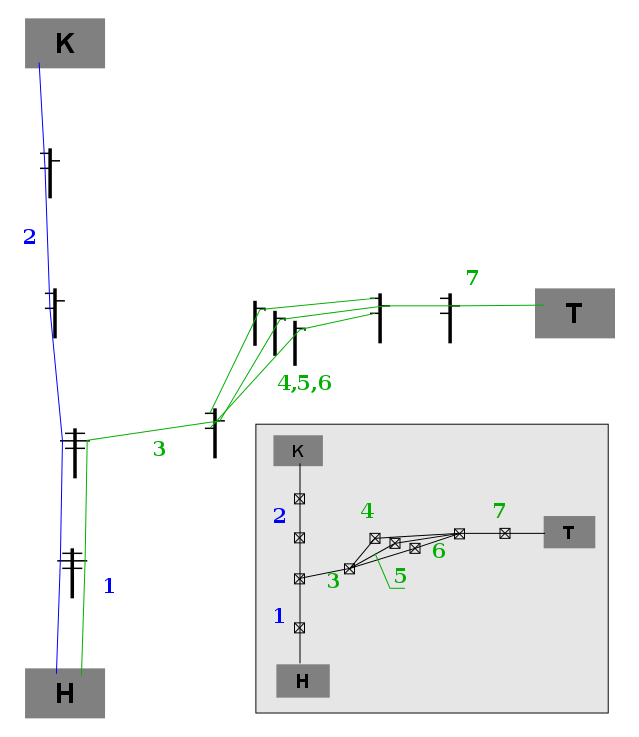