Can we find a better example of a residential street - this looks like it could be unclassified--Pobice 09:33, 11 December 2010 (UTC)

Can we drop smoothness and usability? Can probably still live with usability. For a start none of them appear to be actually smoothness=bad to me!--Pobice 09:33, 11 December 2010 (UTC)

1 1/2 years later: OK. I removed the tag under discussion like usability=thin_wheels

Some examples were tagged as path. Many people map routes not according to access rights but to it appearance. If a tractor could drive along a route it is a track of grade5. If even a car could go along it is grade1. Glad 18:26, 16 May 2012 (BST)

Most, even all cycleways are wider than a hgv. It's been repeatedly corrected, that the width requirement works only in the other direction; a "track" can not be a track, if it is narrower than a motorcar/tractor, but all of footway/cycleway/bridleway/path can be just about any width. I'm changing those back. Alv 12:31, 20 May 2012 (BST)

And that's a totally new kind of made up distinction, that a footway is "a small path". A footway is any route segment, which is either only allowed for pedestrians, or is mainly used only by pedestrians, even if it would allow cyclists. In some places users have come up with the idea that only signposted footways exist. I really need to write down the decision trees for both common approaches to tagging these. Alv 13:09, 20 May 2012 (BST)

Which, actually, only gives advise on differentiating between an unclassified road and a track, not between a track and path/cycleway/footway/bridleway; the only reference to path is, as I wrote, that a narrow thing can't be a track. Alv 22:17, 4 June 2012 (BST)

I changed some paths to tracks again. Why: see first picture in the article.
The page Tagwatch/Photos gives a good decription of all the highway types. In future may create a new page and replace links to pictures by pictures themselves. Glad 19:11, 4 June 2012 (BST)

If we had an OSM king you might be right. But we have not. Glad

I believe where this confusion comes from: that somebody used path on the page instead of cycleway for most of the examples involved. I share your sentiment that widespread use of "path" is not good (i.e. for paved, signposted (like

) wide shared use ways just for cyclists and pedestrians), and that reasonable people use "path" only for the smallest "unbuilt" ways - at least if it's used without any more specific tags. Because of various uses of path/cycleway, I didn't bother editing all of the examples on the page to spell out (once again) the different possible taggings, with path and with cycleway. However, using highway=track for those (since most of them are at least 3 meters wide - which is "wide enough for two-tracked vehicles"), is just wrong, when they're not for motorized vehicles - like File:Highway-path motorvehicleno.jpg. Hence, given the amount of "tracks" added in that edit, the simplest action was to just revert and wait for a better edit.
On the example picture with the fallen tree: bad maintenance does not (mostly) change the classification of a highway; it's up to the local mapper to look at the rules of allowed vehicles, surroundings, destinations connected by the way in question, and even at the predominant usage to tell if that way is classified as service (driveway), path, cycleway or a track - or even residential or above. Alv 17:29, 7 June 2012 (BST)

I think this is again a problem of a) inappropriate choice of key name, and b) imperfect documentation. I agree with Alv, but just for testing purpose I tried to find a clear guideline what should be used when, but right now it is simply not there - at least I can't find it in the wiki. It is all "you may, you could, it is possible, maybe better". Anyone interested in a constructive discussion to create and document a decision tree for the most common tags? --Imagic 08:40, 5 June 2012 (BST)

Most of the mappers in Germany agree on the version I posted. Are all of them wrong?
All common tags? Your approach is too ambitious. Let's start with highways, tracks and paths. Glad

Huuuh - are you sure you responded to the right paragraph? All I said was that I (that's just me, one person) agree with Alv (I'm living in a free country, I have the right to agree and disagree with whomever I choose) and that I (again, just me) could not find a guideline in the wiki (maybe it's there and I am just to dumb to find it). Then I asked if someone wants to start a discussion in which we all together find a consensus and improve the documentation. I nowhere mentioned anyone from Germany nor claimed that everyone in Germany is wrong. Finally: when I wrote "most common tags" I obviously meant highway-related tags as this is the discussion page of examples of highways.
So again: anyone wants to start working together on some improved documentation? Or should I post this in the relevant mailing lists? I'm willing to do most of the writing but I'm also not the King of OSM, so I need suggestions, opinions and feedback. --Imagic 10:53, 7 June 2012 (BST)

Great, isn't it (living in a free country)? I already started with oneway and Landform examples. Many people started in good spirit but gave up soon. Why should I be different? Glad 12:31, 7 June 2012 (BST)

Few weeks back I started working on a decision tree User:Alv/Highway_decision_tree. I didn't announce it here, because I should be able to write a more concise, or better laid out version than what the page is at the moment. Alv 17:29, 7 June 2012 (BST)

The highway=* tag is a description of the importance of the highway for the road grid, not the appearance or access. There are seperate tags for those features. There is a good reason for this. 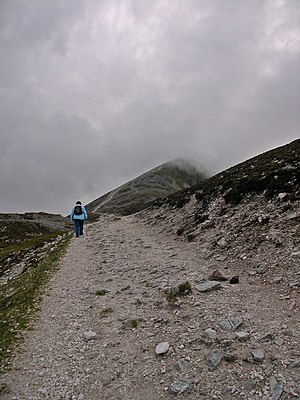 The route on the right is tertiary, when it is the only connection between two villages. It is a path when there is a highway for cars in parallel.
Life is a little bit more complicated than black/white. Glad 22:30, 6 June 2012 (BST)

Yes, is there any problems with that? If there are better ways next to a way then it have lower importance. The quality of the road is not the same as the priority of the road. Of course important roads gets more work done to improve quality. You can tag the quality of a road with different tags that will render and routers will use them.
I would go as far as to say that life is so complicated that there is no black or white, only colours. However I am not in possession of a mind reader so I can not see what that metaphor represents in this discussion. If you believe this is my personal opinion you are wrong. This is something that have been decided by consensus by the community as a whole. Sometimes you have to set your personal opinion aside and agree with others so that you can start and make a better map. Unless you are too stubborn, arrogant and stupid to do that and just spend all your days trying to win/start discussions with everyone (I am not looking at you, yet).
Have fun mapping :) --Gnonthgol 00:14, 7 June 2012 (BST)

Always surprised that Wikis seduce people to judgment on others. Glad to hear that it is the majority of OSM people who tag 3m width paved routes as path if some other conditions are fulfilled. Glad 10:44, 7 June 2012 (BST)

I thought that was what the page read before you started editing it? Alv 17:29, 7 June 2012 (BST)
Funny that you should mention 3m wide paved paths. One of the routes in my area is a 3-4m wide paved road in the mountains. It was built as the only road between two cities of about 500.000 people and was built as a trunk road. Since that time there have been new shorter roads that goes in tunnels. The old trunk road is now in the middle of a natural reserve and goes nowhere. Even though it is built to code as a trunk road it is only used by people that are cycling over the mountain for fun. In OSM and all other maps I have seen it is tagged as a path. --Gnonthgol 21:09, 7 June 2012 (BST)

OK, no consensus possible. My last comment on this page (I promise): I checked Path statistics. There are more than 1000 different specifications (5000, including differences in numbers). Let me mention some of them: highway = Path; surface = asphalt; witdth = 4; tracktype=grade2; maxspeed=40; motor_vehicle=yes; maxweight=3.5. Glad 11:30, 8 June 2012 (BST)

The text here says: "A Public Footpath under law in England & Wales. Foot traffic has legal right of way. A footway has a different definition under UK law.". What do those sentences actually mean?

Also, the suggested tagging's incorrect - "designation" is the most widely used way of tagging a public footpath in England and Wales. --SomeoneElse (talk) 23:29, 7 November 2014 (UTC)