Sounds good to me! I'm currently using the amenity=arts_centre as a catch-all, but it would be nice to specify places that are just galleries. TomChance 17:33, 23 July 2007 (BST)

Yes we'll need to describe fully the distinction, and what constitutes an amenity=arts_centre. Also something which describes itself as a "museum of art". I'd say that should count as an art gallery and not a museum, but either way we need a description which makes the distinction -- Harry Wood 14:11, 10 January 2008 (UTC)

not according to Key:amenity and Key:tourism. an art gallery does not appear to be important, and thus sits in tourism. to be honest, the keys are somewhat inconsistent and overlap a lot, this sort of discussion seems to come up fairly frequently - Myfanwy 01:36, 8 January 2008 (UTC)

Museum has been tourism=museum for a long time now. This tag will sit nicely alongside as it is proposed. The fact that art galleries are not exclusively for tourism doesn't really matter in my opinion. -- Harry Wood 15:00, 2 June 2009 (UTC)

gallery as a shop

I think it's the wrong tag name here. I would consider an art gallery to be a private gallery selling art (e.g. shop=art_gallery). From wikipedia articles, MoMA, Louvre, ZKM (which I guess this tag should be useful for) all are noted as (art) museums. So this should better be art_museum or a subtag for the existing museum tag. The tag art_gallery is really misleading here. Ulfl 02:05, 29 January 2008 (UTC)

The National Gallery, London? But seriously, yes, the term is ambiguous in the english language, a 'gallery' is used for both private commercial establishments and public viewing places. 'Museum' does have the connotation of old stuff but then there are Modern Art Museums in both Stockholm and Sydney. So, I suggest that the key thing is that commercial galleries are tagged with shop=*, i.e. the primary purpose of visiting is to buy a product or server, and public galleries / art museums are tagged with tourism=*, i.e. the primary purpose of visiting is amusement or educational. Probably does not matter whether we use 'gallery' or 'art_museum'? I'd mildly prefer the first but would vote for either. MikeCollinson 18:56, 5 July 2008 (UTC)

I think I've tagged some shop=art art shops (which often call themselves galleries)
As I said above, I think it would be nice to apply this gallery tag even where an art gallery calls itself "museum of art". That gives us a nice distinction between art galleries and museums of history/science etc.
-- Harry Wood 15:07, 2 June 2009 (UTC)

I think this is pointless, as there are already shop=art for galleries and tourism=museum for galleries which do not sell. Create a subtag for museums if you want to tell that it is explicitly for art work. I also don't agree that those are "for tourists" Dieterdreist 09:41, 6 November 2010 (UTC)

Read the proposal and the discussion above, shop=art is for private galleries whose main purpose is to sell art. Museums are for general collections. Art galleries are quite different. TomChance 11:09, 6 November 2010 (UTC)

no, museums are not for "general collections", they are for all kind of museums including art galleries that do not sell. If you want to be more specific, use a subtag like "museum:theme=art_gallery/general_collection/...". Shop=gallery does not exclude non-private art galleries that sell art. The distinction is not private/public/institutional but mainly selling or not. -- Dieterdreist 11:21, 6 November 2010 (UTC)

So what exactly is the difference? In colloquial German, there is no clear distinction between "Kunstmuseum" and "Kunstgalerie". From wikipedia:de:Kunstgalerie: "Fortan bezeichnete man vor allem Museen als Galerien, die eigens zur Präsentation von Gemälden errichtet wurden." ("Thereafter, the term gallery is primarily used for museums that were constructed to present paintings.") --Head 13:23, 9 November 2010 (UTC)

"What exactly is the difference?" Well there is a lot of overlap within the meaning of the word "museum", and it can indeed incorporate art galleries under it's umbrella. So there's isn't an exact difference, but we can make a reasonably exact difference in the tagging by saying that tourism=museum is for historic/science museums and anything called a museum, except for things which would be better covered by the new tag tourism=gallery (change them over). -- Harry Wood 22:30, 8 July 2012 (BST)

Why the highly ambigous "gallery" and not "art_gallery" ?

I think that tourism=gallery is not clear at all. The value should be "art_gallery". Gallery has lots of meanings e.g. in minery, several meanings in architecture, etc. -- Dieterdreist 11:21, 6 November 2010 (UTC)

That would be less ambiguous, unfortunately this has now moved to a vote after proper discussion (albeit a while ago) and if you look at the current usage this tag is already widely used. TomChance 11:32, 6 November 2010 (UTC)

Obvious advantage of 'gallery' as opposed to 'art_gallery': it's shorter and easier to type, which is not to be underestimated as general usability point for tags. As you say, there's a disadvantage that 'gallery' can mean other things. Relatively minor disadvantage I would say. The most obvious meaning of 'gallery' in a POI context would be the intended meaning. But how you weigh these things up is a matter of opinion of course -- Harry Wood 14:00, 12 November 2010 (UTC)

It's a balance of considerations. Obviously art_gallery is clearer. This is at the expense of being longer, and being two words with an underscore character. More messy and inelegant, but yes... clearer. So the question becomes how much clearer? Is it worth making the tag longer and messier, in order to disambiguate with other possible interpretations? My answer would be: No it is not. The word "gallery" is plenty clear enough. -- Harry Wood 15:44, 16 August 2012 (BST)

I think that art galleries don't have something to do with tourism. At least not more then restaurants or train stations. -- Dieterdreist 11:21, 6 November 2010 (UTC)

This is also discussed above and in a number of other features in the "tourism" category. I agree that the distinction is really poorly executed, but given that museum is considered to be in tourism I agree with the previous discussion which led to this proposal going into the tourism category as well. TomChance 11:29, 6 November 2010 (UTC)

Thanks for tackling this tagging issue as it definitely needs to be sorted out. However, I don't like the user of tourism, especially tourism=gallery. I frequently visit local museums and they are often filled with groups of students for projects; if we follow the tourism logic should we also put these buildings under education or university? I prefer to describe such buildings as a museum and it fits the description in wikipedia (http://en.wikipedia.org/wiki/Museum): A museum is a building or institution that houses and cares for a collection of artifacts and other objects of scientific, artistic, or historical importance and makes them available for public viewing through exhibits that may be permanent or temporary. I would prefer a top level museum tag that described the artifacts on display. Sean Horgan 15:31, 11 November 2010 (UTC)

I would like to restructure and shift around a lot of tags, but given the disruption that kind of thing causes, it's more productive to make iterative small improvements. The proposal is just to add a tag which sits nicely alongside the existing (very old and well established) tourism=museum tag.
So the argument that there's nothing specifically 'tourism' about art galleries. Local people can enjoy them too. etc. This is true of course. But maybe it's a minor problem because actually when we talk in generalisations, art galleries are for tourists (...often ...for the most part)
As a philosophical thought experiment, imagine if you were to sit down and categorize everything we map. re-invent keys and perhaps values too, for all our tags. You could attempt to make everything more "correct", but actually you'd probably find that there would still bit some tags which sit a little awkwardly in whatever categorisation schemes you choose. I don't know what the long term solution is for re-categorising a load of tags into better keys etc, but I suppose what I'm saying is that a bit of slightly incorrect categorisation is unavoidable, and in this case it is only slightly incorrect. In other respects it's quite elegant (gallery should certainly be in the same key as museum)
I guess I'm going to struggle to persuade anyone to change their view based on these kinds of wishy-washy arguments, but you have to admit, it's a shame we've managed to get to the end of 2010 and still don't have a nice simple art gallery tag!
-- Harry Wood 14:00, 12 November 2010 (UTC)

Is there an 'art gallery icon'?

Is there alredy an icon for rendering an tourism=gallery, shop=art? 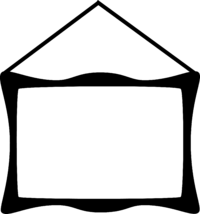