Discussion about the tagging of environmental zones

2) Tag as a relation to existing ways

areas from a relation. Idea

3) A new value in the border tag

4) A new value in the toll tag

What about tagging the signs as nodes on the way and adding a new access-tag as an access and routing restriction?

Overall comments on the tagging methods

Of the ideas presented here:

1 and 3 are the same, tagging method just being the argument. However the tagging proposed for these does not make sense to me, it seems to completely ignore the currently set conventions for tagging areas.
2 is likely to be difficult to do with current editors, adding a whole city to a single relation would be a very large prospect. However, it is the theoretically best way to go in terms of data structure. It would be fairly easy to parse by routing software. The tagging should be generalised to also allow support for London's Congestion zone (as well as its LEZ).
4 looks completely unusable by routers. Toll is inappropriate.
5 would be difficult for routers to use, if there's incomplete data you'd head into an area and get fined. No association between nodes and the area.

I would probably support a mixture of 1/3 and 2 as the most sensible way forward. In any case, this proposal should be generalised to be more of a tagging proposal for 'limited access areas' so to include all large areas limited to some form of traffic.

a) can you please explain why a toll tag should not be identifyable by a routing software?

b) can you explain, why you think a LEZ is not a toll zone?

c) can you explain, why the London LEZ is called "charging zone" then?

d) can you explain, why an area like in 1 or 3 should be easier to use by routing software than a toll zone?

A toll zone is a zone in which some vehicles have to pay to be allowed to enter. (Usually bicycles don't have to pay.)

I a German LEZ there are:

Discussion about the rendering of the environmental zones

Rendering of the zone

Rendering of the locations where you can buy the special permissions

How do the "others" handle this 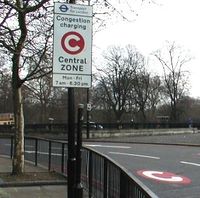 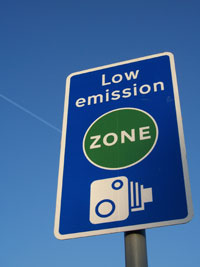 I propose to use a different tag: boundary=low_emission_zone. Reasoning: