Don't see the need for two separate tags (shop=beverages & shop=alcohol). I'm guessing it arrived by accident. The distinction between government licensed and not, isn't actually that interesting. Something for a properties tag surely? I think one should be deprecated in favour of the other

I also support the use of (shop=alcohol) for shops selling alcoholic and non-alcoholic drinks. Having said that, there are some shops that sell strictly non-alcoholic drinks (such as juice shops) - so I would like to suggest to keep the tag shop=beverages for these shops (and maybe change it's description to 'selling non-alcoholic drinks'?). Code.elusive 08:42, 18 October 2015‎ (UTC)

"shop=beverages" seems a lot more popular the "shop=alcohol". 1922 uses vs 476 uses (Update note: That data is from OSMdoc which is stuck on Aug 2009 values)

Here's what I think is going on here. In accordance with the current state of tag docs, and this "government owned or licensed" distinction, I believe UK off licenses should be tagged "shop=alcohol", but I suspect that many are not because 'beverages' was an older tag (on Map Features for a long time, but never documented properly), and so a lot of UK off licenses have been tagged with it. There might also be a lot of UK mappers who prefer that tag to this day, and still map with it. I should probably run some counts within the UK to back up this theory.

Leaving aside the defined distinction (which is not useful anyway as I said above) I'd argue the word "alcohol" is more usefully precise than "beverages" anyway. "Beverages" is often used jokingly as a colloquial pseudo-posh stand-in for "alcohol" (or "alcoholic drinks" a.k.a "booze") but in fact the meaning of the word is any kind of drinks. With that understanding some people probably use shop=beverages for off licenses which also sell coke and lemonaid (pretty much all of them no?) and reserve shop=alcohol for a shop only seeing alcohol (rare). That is not the distinction defined on the pages here. It's also not a useful distinction for similar reasons (whether a shop also sells soft drinks, is a minor point which should be represented with some kind of minor soft_drinks=yes combo tag)

So I think it would be tidier if everyone migrated to the shop=alcohol tag, but I also think it might be an unpopular idea.

The values I gave above are based on OSMdoc from Aug 2009, but today if we look at TagInfo we have:
"shop=beverages" 5371 uses, "shop=alcohol" 7098 uses,
So there's been a shift in the balance of usage between the tags towards shop=alcohol, so that's good (in my opinion).
I think I'm going to gently nudge things further in that direction, by suggesting in the tag docs themselves, that these tags are largely duplicating each other, but that the "suggested distinction some mappers have followed" is related to government licensed or not
-- Harry Wood 11:21, 8 December 2011 (UTC)

Today if we look at taginfo:
"shop=beverage" 6628 uses, "shop=alcohol" 18384 uses
So shop=alcohol mapping has grown a lot. shop=beverage has grown a little bit
Back in 2011 I introduced some description on the shop=alcohol page with this edit which suggested that this shop=beverages tag was overlapping and perhaps a bit unnecessary. Nobody complained about that, but it was done fairly gently. I'd like to strengthen that language a bit, and reflect it in more places. It would be too strong to state that it is "deprecated" but this tag was never a good idea, and was never very well documented, so I gently propose that we try to gradually discourage it more, so that it withers and dies.
I mentioned "The distinction between government licensed and not, isn't actually that interesting. Something for a properties tag surely?" ...so maybe we should come up with an idea for such a properties tag, as the alternative to using shop=beverages. Maybe licensed=yes? But that would be need to be documented on the shop=alcohol page
-- Harry Wood (talk) 11:00, 22 May 2015 (UTC) 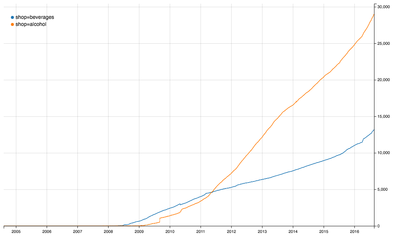 We can see shop=alcohol overtook the old shop=beverages tag mid-2011, and continues to grow faster, however there's still growth in use of this tag.

Recently the docs were expanded on this page in a very generic way, which makes the tag look more legit, but without anyone working on actually explaining why it exists :-/

What do you think of something like alcohol_only=yes and alcohol_type=whine for a whine shop for example? --westfa 10:52, 4 May 2010 (UTC)

Whether these sell alcohol should be optional (can depend on jurisdiction) —Dieterdreist (talk) 00:48, 26 September 2020 (UTC)