Typhoon Haiyan (Wikipedia), also known as Typhoon Yolanda, is a tropical cyclone that devastated the Philippines. It first made landfall at Guiuan, Eastern Samar on the morning of November 8, 2013, and then proceeded to Tacloban City (map), where a storm surge laid waste to much of the area. The typhoon then caused destruction in northern Cebu, Panay island, and northern Palawan before exiting the country towards Vietnam.

Jan 1st 2014, 1,670 voluntary contributors of the OpenStreetMap project from 82 countries have contributed to map for the typhoon Yolanda / Haiyan humanitarian response. They did this mainly from their home with their personal computer communicating and coordinating on the internet. The Humanitarian OpenStreetMap Team (HOT) acts as a bridge between the OpenStreetMap Community and traditional Humanitarian Responders.

OpenStreetMap offers an online map which is updated by the minute. Meanwhile various tools and services allow data extracts for GIS specialists, Routable Garmin GPS data, OSMAND, and other device-compatible downloads. With an internet connection regular syncing is possible with open access to the community contributed data as it comes in, but OpenStreetMap's bulk data downloads are ideal for use offline. Of course the maps are also printed to paper. Aid agencies such as the Red cross delivered poster-size maps to field teams. 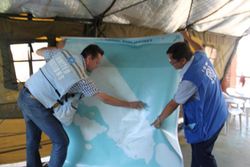 IOM staff showing the large OpenStreetMap posters in the DSWD Operations Center in Tacloban Airport. Download this map from MapOSMatic

Information about this Humanitarian Activation 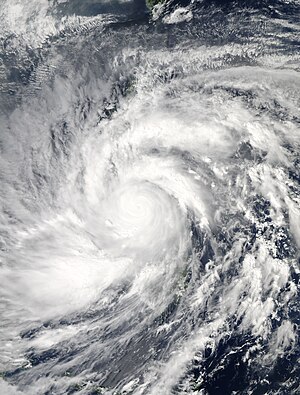 The various OSM developers communicate over internet through various communication channels. In 2013 they implemented the new Humanitarian Map Style, a map more adapted to humanitarian actions. This map, hosted by OpenStreetMap-fr, is integrated in various online map tools. For this activation, we decided to show the damaged buildings on this map and to better integrate the various paper maps in the humanitarian workflow. The developers responded quickly and we were able to deliver these maps 10 days after the typhoon.

The Tasking Manager and the JOSM editor are essential parts of this Activation. As new imagery are available, new jobs are added to the Tasking Manager. It has allowed HOT to coordinate efforts of mappers around the world. Some days there were more then 200 simultaneous mappers registered on the Task Manager and editing mainly with the JOSM editor. ID editor is also used for less intensive mapping. LearnOSM.org offers learning material for beginners and more advanced mappers. 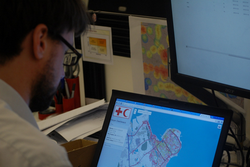 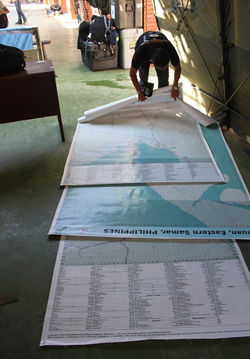 With the Humanitarian style integrated, these three tools show the buildings damaged or destroyed. Better field survey and quality control is possible. We have produced in coordination with the Red Cross detailed maps that help identify infrastructure at risk and severely affected areas. Navigation Products extracted from the OSM database are also facilitating field teams road navigation in the region. Updates to the OSM database are immediately reflected on the maps and in the various Data extracts available.

Andrew Buck, assisted by Maning Sambale and Pierre Béland, are coordinating this activation. We coordinate with the Red Cross and the Digital Humanitarian Network. Regions requiring mapping are coordinated through the use of the HOT Tasking Manager.

Contributors from 82 countries collaborate to this Activation through internet. In such a context, various communication medias are used to coordinate. The support team communicates via the irc://irc.oftc.net #hot IRC channel. You can join the Support Team and the Coordinators on the IRC for discussions or help for mapping. You can also talk with other mappers or the support team by installing mumble and connecting to our server talk.hotosm.org

Public e-mail communication among HOT Team members can be found at Humanitarian OSM Team (HOT) Mailling-List. The first posting was "Preparations for Typhoon Haiyan" which appeared the day before landfall. Thereafter, the majority of posts to the e-mail list in November 2013 related in some way to the typhoon response.

With the dispersion of the population in numerous islands and with the extent of the damages, Up-to-Date maps is an essential aspect of the management of this crisis. Tremendous efforts have been made by the OpenStreetMap community. The developers are adapting tools to provide up-to-date maps rapidly to humanitarian field workers. Hundred of contributors are also tracing over Satellite imagery to update continuously the maps. 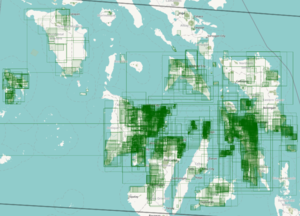 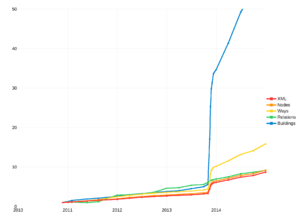 Browse the map to get a feel for the data we have available. Different map styles can be selected on the right side.

How you can contribute to this activation

A Map which shows the damaged buildings in Tacloban.

A CrisisMap which shows "Elements at risk" based on OSM as well as damaged buildings and blocked roads for the Phillipines. Further layers include population density and instagram images. http://crisismap.geog.uni-heidelberg.de/.

The first week of this Activation, intense work was done by OSM contributors to update the base map for the affected zones using pre-Disaster Imagery (mostly Bing Imagery). From, Nov 14 2013, Post-Disaster imagery from various providers started to be available. As these imagery arrive, new tasks will be added. Your help is welcomed for remote mapping and is essential for a rapid response and the success of this operation.

Tacloban City, Leyte (population: ~220,000) has been hit hard. Important Relief efforts will be localised there. New reports indicate international and local aid workers are beginning to arrive. We have already pretty much mapped every building in the city based on pre-typhoon Bing imagery (second-pass validation is always welcome mind you). Other mapping areas are laid out in various task manager jobs : 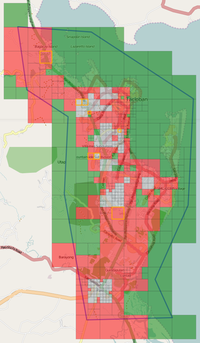 Beyond these, we need experienced mappers to make assessments of missing data on a wider scale. Improvements to coastline, and fix up of place names is needed.

WikiProject Philippines pages probably could use some updating. These notes on Bing alignment may be of interest.

Here is a guide on useful tools and shortcuts for tracing buildings in josm. It is highly recommended you take the time to learn to do this well as it will make it much easier for you to contribute to the map. Google doc

Todo: Just a summary of tagging and visualisation tricks should go here

Bing is the basic Imagery available for OSM. It provides high-res Imagery for most of the affected areas. However, other high-res imageries are sometime used for areas where more recent imagery is provided.

In support of Operation Damayan, the US Government has requested that DigitalGlobe imagery be temporarily released and licensed to the public for humanitarian purposes.

This imagery is available under the NextView licence for 30 days, starting on Nov. 16, 2013. (It appears that this period of time could be renewed, depending on operational need, according to this tweet).

To use it for mapping, go to http://tasks2.hotosm.org/job/1003 , Workflow tab, read and agree to the NextView licence, and click on the given wms: URL in the Workflow tab.

TMS and WMS services for priority areas are also hosted on OSM France servers, under NextView license (unlimited in time), as described in these posts: https://lists.openstreetmap.org/pipermail/talk-ph/2013-December/004884.html

For the first time in the history of the International Charter Space and Major Disasters, CNES and Astrium, producer and distributor, released the Pleiades images acquired within the Charter under a free license.

The raw imagery files are available online on a public ftp server, for whichever innovative use you may see fit to support disaster and recovery efforts: ftp://ftp.astrium-geo.com/Philippines/

You can for example print them on paper for wall posters, or for quick paper maps to walk around damaged areas with a view from the sky, to go navigate in the field on a road network riddled with fallen trees, etc, etc, etc...

Tacloban Pleiades-1 image was used for example to produce post-disaster high resolution imagery atlases of Tacloban City, Palo and Santa Fe municipalities, with a pdf map for each barangay or village, on request from responders in Tacloban who wanted to plan the relief work of NGOs: http://wms.openstreetmap.fr/philippines-yolandaph-pleiades/

that include the following TMS URL for Roxas image: http://tiles.arcgis.com/tiles/DO4gTjwJVIJ7O9Ca/arcgis/rest/services/Philippines_Pleiades1_11nov13/MapServer/tile/{zoom}/{y}/{x}

and, for Tacloban image: http://tiles{switch:1,2,3,4}.arcgis.com/tiles/DO4gTjwJVIJ7O9Ca/arcgis/rest/services/ph_v2/MapServer/tile/{zoom}/{y}/{x}

Pre- and Post-Disaster Landsat (8 and 7) over the most affected area :

Since the Bing Imagery is partly low contrast you might wish to enhance it. An ancient JOSM binary exists with which you can do so, but a lot of plugins don't work with it anymore - buildings-tools amongst them. Go here for details: Enhance Imagery.

Kate Chapman is investigating the licensing of place codes and ways to link them to OSM data. Currently this investigation is going through OCHA (Office for the Coordination of Humanitarian Affairs, part of the United Nations Secretariat).

Maps provided by the University of Texas, rectified with NYPL's Mapwarper tool.

News about this Activation for Typhoon Haiyan 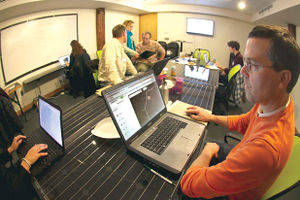 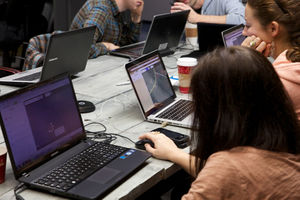 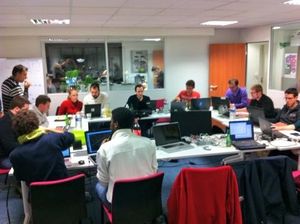 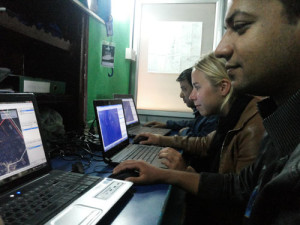 In some parts of the world people are organising mapathons events, where you can meet with mappers in person. This is an opportunity to meet-like minded pro-mappers, learn how to contribute to OpenStreetMap if you're new to it. Other events are more generic, on any technology for crisis response, by can (should!) have a bunch of people doing stuff for OpenStreetMap. Upcoming events are listed below. quietos_C%C3%B3rdoba Córdoba (Spain)] - Wednesday, 4 December

Please link to more details for these events

Contributor Statistics for this Activation

The following are videos about the Haiyan Activation: