Stations of the Cross at Saint Jakob, Austria. This is a religious route where one preys at each of the shrines, so-called "stations". 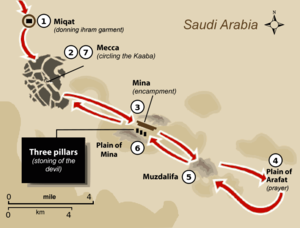 The routes and stopping points of the Hajj.

The relation tagged route=worship can be used for religious routes with several stops on its way where one can worship. It is the route-based opponent of amenity=place_of_worship

, which is meant for single places (nodes and areas, not ways and relations)

The tag is meant routes in a public space (not enclosed inside a religeous building or complex) that has several well-defined places along it's way where one can stop for worship. The routes can be taken by any form of transport, usually on foot but optionally by bike, car, horse etc.

One example of such a route is the Roman Catholic Stations of the Cross. The Stations of the cross is a route consisting of (usually) 13 shrines depicting the crucifiction of Jesus, culminationg at a 14th shrine at a church.

Another example is the Hajj, although only one Hajj route, in Mecca, is available in the world.

There is no standard tag to map a or the Cross on OSM, although various methods have been used. Next to the Stations of the Cross, there are other types of Christian worshipping routes, and I can only assume they exist in other religions as well.

Prior work has been done by User:Waldhans on his user page user:Waldhans/Stations of the Cross, but he doesn't seem to have made a proposal proper outside of his user page. Also, the routes he has tagged (see examples) are not consistently tagged.

Alternative ways of tagging a Stations of the Cross route as a relation:

The tagging of the relation is as such:

The elements of this relation should be:

This proposal applies to all (religious or non-religous) routes of worship which have a certain number of prescribed stops where one can worship on the way. The stops must be clearly visible on the ground (such as a shrine or temple).

This proposal does not apply to a route which leads to a certain place of worship, and where the trip itself might be concidered a form of worship, but that does not have fixed stopping places along it, even when there are many people taking the same route.

This proposal does not apply to sight-seeing tours for touristic reasons, even if they cover only places of worship.

No specific rendering on the default OpenStreetMap; specialized renderers may choose to render the worship routes.

Common names for routes of worship, such as "Stations of the Cross", "Via dolorosa" and "Hajj" might become a redirect to this page.

amenity=place_of_worship should have a link to this tag.