Jeff enjoys updating maps in the area, now that he's figured out how to log GPS traces with his Garmin Nüvi 255w.

During working hours, he is the Lead Developer at Copier Network, LLC in San Leandro, California.

During his off-time, he actively participates as a coach for CYO Basketball at the Our Lady of Guadalupe Parish and FNYB baseball, both in Fremont, California.

For the entertainment of the people around him, he sings in barbershop harmony with the Peninsulaires Chorus in Sunnyvale, California. Previously, he sang with the New Dimension Chorus, where he was awarded 2006 Barbershopper of the Year. 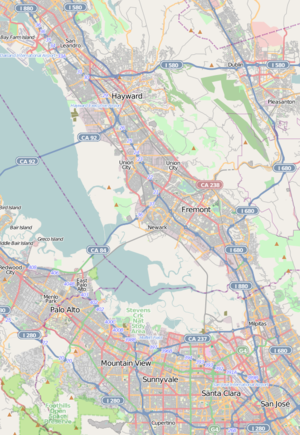 A routing map for Garmin devices for the area shown on the map at right is updated a couple of times a week and stored at http://myhostingaccount.info/garmin/ as SanJose.img

This is my driving area, so I update the image a couple of times a week after a good update so I can find areas where the OSM data does not match the ground.