You must give credit to the image providers.
This is required by the imagery owners and helps us to see if your mapping might be outdated.
Use the tag format: source=satellite, provider, date (yyyy-mm-dd) (date of image capture) 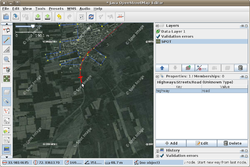 SPOT provided a WMS for a pre-disaster mosaic of the area, however this appears to be no longer available: 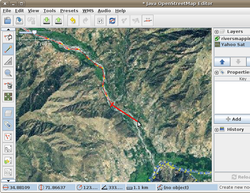 Yahoo! Aerial Imagery can be used in editors.

Low res: - There is complete coverage at a very low resolution. Zoom out until the grey 'sorry' messages are replaced by low res imagery tiles. In JOSM you need to remove the layer and restart the capture while zoomed out.

We can use this to trace any major features which may be visible, but only the largest highways would be visible. We can trace the positions of rivers in the where they can be clearly delineated in the mountain valleys (North) And this may be useful. We could also trace areas of mountain glaciers.

High res: Some high res imagery is available in and around some cities as indicated by the coverage outline relation

coverage outline relation (in these areas the grey 'sorry' message doesn't appear, and you see detailed imagery!) This is good enough for detailed highway sketching. Remember the imagery is pre-floods. Avoid overwriting anybody's live updated flood corrections! (at the moment there aren't really any) Go ahead and help us make a map! See the Mapping Coordination page for information on which areas are most urgent.

Landsat low res suitable for mapping roads and rivers, and confirm the location of populated places.

On-going efforts to get access to satellite imagery under a license scheme suitable for tracing in OSM:

On-going efforts to to get access to satellite imagery under a license scheme suitable for tracing in OSM:

Taking base images from NASA Observatory, PakGIS [1] has geo-referenced the following moderate resolution post flood images of Pakistan for national and regional analysis:

A mosaic of maps from this collection is available as WMS / TMS for OSM editors:

The Office of Coordination of Humanitarian Affair (OCHA) is chairing a data sets working group on the ground and providing guidance on core data layers, they managed a multi thematic public domain data download point.

The UN Logistics Cluster (UN LogCluster) who is the UN data custodian for transportation data had a long operation in Pakistan in 2009 and are holding a key transporation data sets for this region.

UN LogCluster transportation data are based on the UN Spatial Data Model for Transport (UNSDIT) schema, see [4] for a crosswalk with OSM tagging system

Clarity is needed from Pakistanese authorities, OCHA data sets working group and United Nations data custodians on which data sets to use for this operation