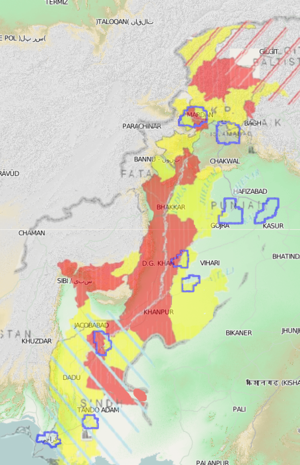 Reliefweb provide some of the best overview maps of where the affected regions are. This one shows Red and Yellow areas for "moderate" and "severe" affected regions. download PDF. Also overlayed with Yahoo imagery coverage regions. See /Mapping Coordination and /Imagery and data sources.

Starting in July 2010, Pakistan was hit by massive flooding due to monsoon rains. The floods directly affected about 20 million people, mostly by destruction of property, livelihood and infrastructure, with a death toll of close to 2,000. See wikipedia:2010 Pakistan floods.

This was only partially successful. The fledgling Humanitarian OSM Team organisation had just formed. Processes and tools we now use such as the OSM Tasking Manager were not in place yet at this stage, but we were ready and keen to coordinate better learning some lessons from Haiti. The past experience meant we also had a larger group of mapping volunteers seeing and understanding the idea of disaster mapping from the start, although still not on the scale of today's army of HOT volunteers.

The floods affected the length of Pakistan, a massive area of the earth's surface, and this made it a very different kind of disaster. It meant we were limited by access to imagery (It was the days of Yahoo! Aerial Imagery, which offered hi-res coverage of just a few Pakistan cities). We were kindly given access to SPOT imagery covering a specially selected polygon along the Indus river. Quite a large area, but certainly not the whole flooded area, at medium resolution (not as good as Yahoo! imagery in the cities) and pre-disaster (See /Imagery and data sources) This enabled some response mapping, but not the level of impact we achieved with city mapping in Haiti.

Below on this wiki page we still have some old mapping coordination information. See WikiProject Pakistan for information on current mapping efforts in this country.

OSM data covers much more that just roads and boundaries, including...

For a complete listing of:

Are you a mapper? Read and contribute to this section to coordinate what to map, where mapping is needed, and using what sources

Use the below mailing lists to channel particpate, coordinate and channel to the OSM project mapping needs, questions, requests for clarifications

Imagery for Tracing and Data Sources

Want to trace imagery? Have vector data sources to share or update? Need to coordinate tiling or rectification of a new source?

Details on satellite and other raster imagery sources for tracing in OSM, and vector data sets for import

Please contribute your ideas and needs here for non-mapping needs. Take on tasks that look interesting and useful. It's important to improve our work as mapping and response progresses.