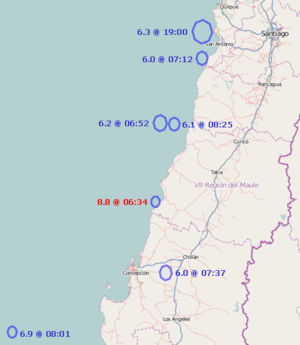 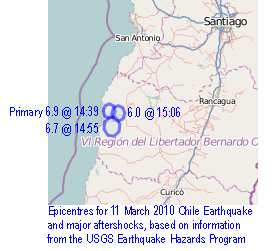 The 2010 Chile earthquake occurred off the coast of the Maule Region of Chile, on February 27, 2010, at 03:34 local time (06:34 UTC), rating a magnitude of 8.8 on the moment magnitude scale and lasting about three minutes. The cities experiencing the strongest shaking — IX (Ruinous) on the Mercalli intensity scale — were Talcahuano, Arauco, Lota, Chiguayante, Cañete, Talca, Concepción, and San Antonio. The earthquake was felt in the capital Santiago at Mercalli intensity scale VIII (Destructive).

The preceding is a contiguous excerpt from the introduction of "Wikipedia:2010 Chile earthquake"; references and wikilinks have been stripped from the original and new wikilinks related to OpenStreetMap have been added. For supporting references, refer to the Wikipedia source.

A 6.9 magnitude earthquake occurred on March 11, 2010, 40 kilometers southwest from Pichilemu, O'Higgins Region, Chile. (...) The place most affected by the earthquake was Pichilemu, the epicentre of the earthquake. It destroyed Ross Park, most of the Ross Casino and many houses in Espinillo and Rodeíllo.

The preceding is a non-contiguous excerpt from "Wikipedia:2010 Pichilemu earthquake"; references and wikilinks have been stripped from the original and replaced with OSM-related links. For supporting references, see the Wikipedia source.

In addition to material contained in child pages to this page, please see...