It is a small area of desert that technically belongs no country because of a discrepancy between the straight political boundary of 1899 and the irregular administrative boundary of 1902. 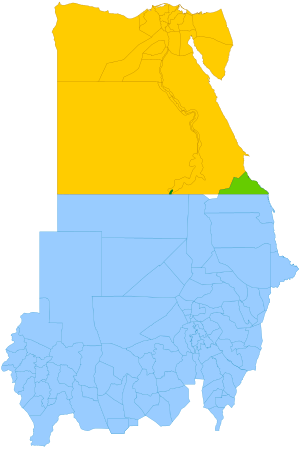 Egypt asserts the straight boundary, and Sudan asserts the irregular boundary. That means both countries claim the nearby Hala'ib Triangle, and neither claims Bir Tawil.

If either side were to claim Bir Tawil (the small white area on the map to the left), they would lose claim to the larger Hala'ib triangle (green area), which has resources that are worthy of disputing over by both countries.

3335661. Unlike the site of Titanic, which is well inside international waters, Egypt and Sudan bounds the territory, meaning that Nominatim mistakes Bir Tawil for being part of either if it is just marked as a mere locality.

As a temporary workaround, Amaroussi, who set up the basics for the locality, included a level 2 administrative boundary so that Nominatim returns Bir Tawil without a country. There's a note for that:

"Technically unclaimed by any country, but using ‘locality’ still attaches it to a country, hence the choice of a level 2 ‘boundary’ as a temporary workaround."

Bir Tawil is an irregular trapezoid of the following points (clockwise from north west):[1]

The route of the southern boundary of Bir Tawil is based on the description from page 4–5 of the International Boundary Study regarding Sudan and Egypt (27 July 1962) – as a work of the US federal government, that publication is in the Public Domain and therefore can be used on OpenStreetMap.

You might be thinking: what's the reality on the ground? It is simple: it is generally just a desert with mountains. As Atlas Obscura puts it:

"Neither nation is interested in Bir Tawil simply because there is nothing there."
— Atlas Obscura, http://www.atlasobscura.com/places/bir-tawil-1 (accessed 22 November 2013)

However, just because Bir Tawil is desolate does not imply that OpenStreetMap cannot have a try a making at map of Bir Tawil in good faith. We are not sure about the default Bing imagery though: tracks tend to get blown over quickly, although bare rock and wadis are robust when compared with the newly released MapBox imagery (judging by the patterns).

On the plus side, it is probably the most Keep Right error-free territory.

Uh, no. Fake cities are vandalism.