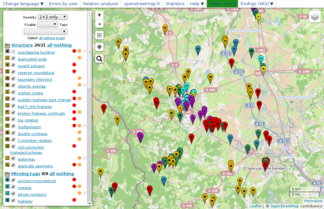 Osmose is one of many quality assurance tools available to detect issues in OpenStreetMap data. It detects a very wide range of issue types. It is also useful for integrating third-party data sets or Conflation.

Warning 1: Do not map for Osmose, keepright, etc. Only fix real errors which you understand and know how to improve correctly!!!

Yes, Osmose has some false positives, like any other validator. Systematic issues should be reported

Warning 2: Avoid mechanical edits. If it was a case for automatic edit, osmose was able to do so!

The idea is to show anomalies identified in the OpenStreetMap data on a map.

Osmose is build upon a Slippy Map. The number of displayed issue markers is limited. Zoom to show more. The markers on the map will open a popup on click. 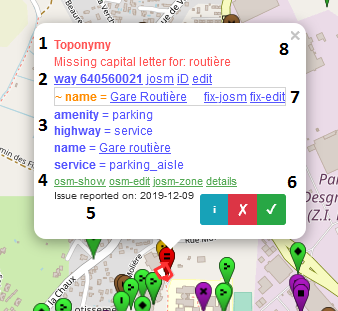 Example of an information popup when clicking an issue marker.

When you click on one of the issue markers, a popup appears. It contains: 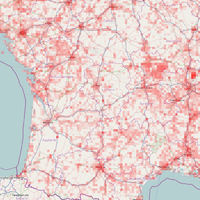 Among the map layers available (under the upper right icon), most are standard basemap choices. There are however to some layers generated by the tool:

Several other layers are generated by separate tools but may be also displayed on top of the selected basemap, including

An information panel is available on the right. It can be open and close with "i" button. It content documentation about current selected marker the section are Titles, Details, Correction aids, pitfalls to Avoid, source code, etc.

This content is included in the source code of the analyses. You can contribute to the improvement of the documentation by proposing changes to the source on Github. Online on the Github website just use the pencil icon and let Github guide you to make a change request (pull request). 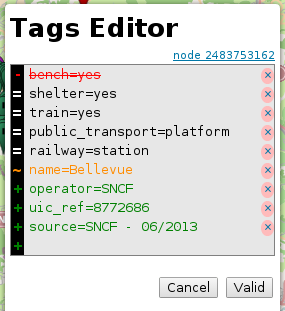 Osmose tags Editor with a deleted tag, a modified one and three added

Osmose allows direct correction of issues through an integrated tags editor. It allows you to view erroneous elements edit their tags. To use the editor you must be logged in Osmose with your OSM account.

Tags are free fields. They must all contain a key and a value separated by an "=". The last line is always empty after the + sign, and allows adding a new tag.

When you press the Valid button, changes go into a queue. They are sent to the OSM server when you follow the link "Save" on the main menu. The Valid button automatically set the issue marker status as corrected. Note that the queued data is still not applied to the OSM database, it is kept only with your personal online session, even if the marker is no longer visible on the "Osmose issues" layer. 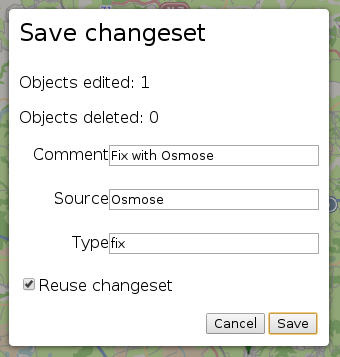 In the Save window, the changeset input fields (Comment, Source, Type) will be stored in the changeset's tags. The "Reuse changeset" checkbox allows to reuse, if possible, the last changeset that Osmose has created rather than creating a new one.

Other features and tools

This mode is an interesting feature, which is list of issues per user. This can be useful if you want to just correct your own mistakes, for example, or to race with your co-worker ;). It is accessible via the URL: http://osmose.openstreetmap.fr/en/byuser or from your user name once logged into Osmose. From the list of issues you can return to the map and display only issues affected to you. 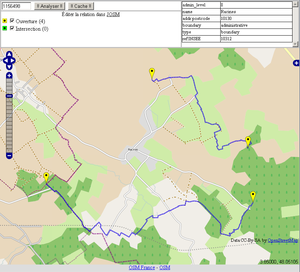 administrative border drawn by the parser

This tool is an addition to the issues "open relationship", "self-intersection" and "too many ways" in "administrative" in the slippy map. It allows you to check after sending a modification to the server, if the errors have been corrected. 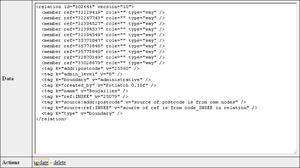 Osmose allows correction of errors by the simply editor rawedit. Its use requires a sufficient understand of language XML and an identification OAuth with OpenStreetMap.

It is possible to make permalinks to the editor as crude http://rawedit.openstreetmap.fr/edit/relation/123456

This editor lets you make changes to any object type, especially the complex and long to load in other editors.

How does it work?

One frontend and multiple backends

The tool comes in two parts:

The coverage is worldwide and a complete and updated list of areas is available on Osmose's API. The areas are not all analysed in the same way, the detection of certain types of defects depends of particularities like language, availability of third-party data (e.g. Open Data)...

Contact the project to offer resources to support for country-specific settings, or new languages:

The source code is available on GitHub: backend and frontend under GPL.

Statistics update are here: update and here update matrix. Analyse scheduler of OSM-Fr server can be found on Buildbot.

Osmose provides an API for external tools to get analysis results.

Issues can be reported by programs to Osmose-frontend.

Analyser send XML issues list to the frontend by HTTP POST to http://osmose.openstreetmap.fr/control/send-update, with the following parameters:

To obtain a source id and code contact the Osmose team.

The issue file can erase and replace all issues on the frontend from this analyser or be diff file and only update frontend issue database.

A check can be written as an internal analyser or an external tool uploading results to Osmose-QA Frontend.

Internal analysers are run by Osmose Backends and can be:

The documentation of each check (named "class") consists of a set of strings defined in the source code. Translation of these strings is handled on Transifex.

Each instance of a class can also have an optional "subtitle" - which is a free text providing details specific to the instance (for example, which Key the issue pertains to). Ideally this should be written as a valid sentence.

An example of how these are served by the API.