The natural boundaries of this conurbation are the sea to the South, the South Downs to the East (to Falmer Rd, and including Woodingdean), the South Downs to the North (the A27 effectively), and River Adur on the West. The original northern boundary was south of Patcham but was extended after World War I to prevent pollution to the water table from shack dwellings.

An area of the city centre has all the building outlines drawn in. Clearly this can be expanded. There's also rich POI data which has been input during the various waves of mapping parties. This will require some maintenance. See something out-of-date? Edit the map!

Progress / What could I work on? 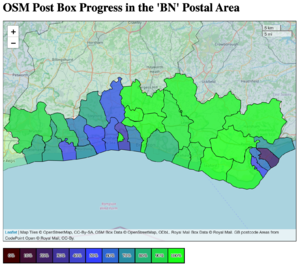 The excellent 'Posthoc' tool shows where Royal Mail says postboxes are. We are trying to reach 100% in all BN regions

The City's parks are mapped, but there is always opportunity to add fine detail. 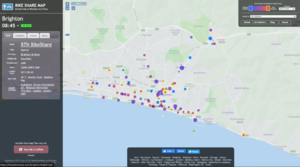 The Btn Bike Share scheme opened in 2017. Some newer locations may need mapping. Tag with:

Brighton has a few cycle lanes & tracks, all of which have relations.

The oldest operating electric railway in the world

A couple of piers. One dead

Not many people will know that there used to be a branch line from near London Road Station to Kemptown incorporating a section of tunnel with an entrance still visible behind a storage depot. 117345347

Brighton was involved early on in OSM 2006/7

2017 DataVis Brighton Meetup: The Map is not the Territory: OpenStreetMap workshop w/Jez Nicholson

A 1.5hr talk/workshop at The Skiff for members of the Data Visualisation Brighton Meetup group. Participants heard about how capturing geo data is a good way to understand mapping, and made their first edit.

A mini project to map all the locations of the new bike share scheme [1]. [2]

the Invitation
the Press Release

The project to map Brighton was taken up by User:Mikel in 2006/7 as a Brighton resident at the time. This instigated a flurry of activity, enthusiasm and events.

Animated GIF of the initial mapping 2006/7. Mappers started from the Brighton core and extended out in each direction. 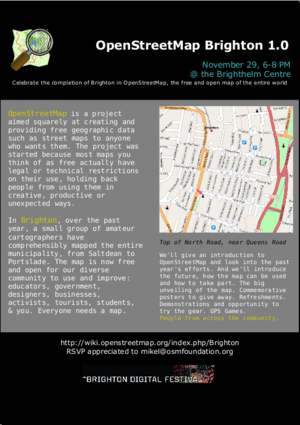 Flyer for the 2007 launch event

A number of workshops and presentations took place: