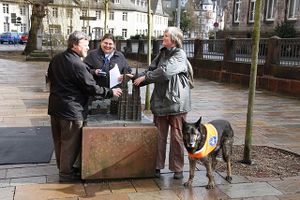 Project of The Week : Shopping malls

This Project of the Week was inspired by a discussion at a recent Toronto OSM Mappy Hour, where some mappers confessed that their guilty mapping pleasure was mapping a shopping plaza.

The host city of the 5th edition of State of the Map is chosen to be Denver, Colorado. The event will take place in September 2011.

You can read the Denver-bid

H.O.T. Activation For Typhon in Philippines

Someone Activated the Humanitarian OSM Team about the the Typhon in Philippines.

Some imagery is already available and people started to correct it and use it. In this area, osm as quite sparse data and unconnected cities.

Your Help is welcome. See the coordination wiki page

kiosk break the logic of shop=*

Someone point out on the mailinglist that shop=kiosk is breaking the logic of others shop=* tags. Usually shop=* is used to describe what is sold and not the typology of the building as kiosk does. In fact, in Germany the word is used for a specific kind of merchandise, but it is not generally valid worldwide. The proposition is to tag the 'building' with something like shop=news_agent AND building=kiosk or kiosk=yes.

In some countries, "paper streets" are streets that have been officially dedicated to the government by the former landowner but that have not (yet) been constructed. A discussion start about if we should add them in OSM and if yes, with which tag? A lot of differents opinions take parts of the debate. We can read things like "Since the street does not exist, it should be tagged as highway=proposed" or "There isn't always a plan to build the street, so i goes for not adding them"

With the cholera epidemic in Haiti, in the midst of the major rainy season, it might be useful to have an analysis tool for the river system. So mappers are looking for the best tool to track / report river mapping.

One tool used in France was proposed and made available on github. Another proposition point out the russian tool

In the US, there is different kind of administrative area that are changing with the states. Some admin levels are spread into different upper levels. Discussions started about how to handle these (admin_level, place, ...)