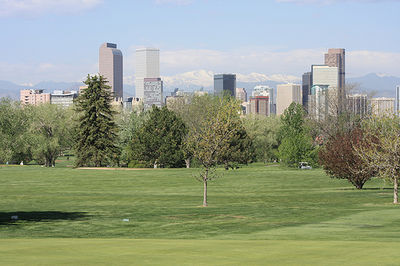 Note: The Denver bid was accepted, but the dates are September 9 to 11, 2011, not the original proposed dates.

Denver, the Mile High City (the state capitol steps are officially at 5280 feet above sea level), is a big city that feels small. It is 380 miles West of the middle of the USA (out here, 380 miles isn't really all that far). Denver is the largest city and the capital of the State of Colorado. It lies at the heart of the population-dense Colorado Front Range Urban Corridor, the area extending South to North along the Eastern edge of the Rocky Mountain range from Pueblo, Colorado to Cheyenne, Wyoming.

The Front Range Urban Corridor is considered "densely populated" for these parts with over 4.25 million people out the combined population of 5.5 million people in Colorado and Wyoming. These two states comprise over 200,000 square miles, or approximately four times the area of the state of Georgia. This intense combination of high and low population densities highlights the disparities in consistency of contributions in OpenStreetMap.

Highlights of Denver include its friendly inhabitants, excellent transport, and copious local beer. Wynkoop Brewery, Lyons Brewery and New Belgium are just a few of a long list!

The team of organizers for this event include people who have been organizing mapping parties for years as well as running similar-sized events. Their connections with local, national and international organizations greatly facilitate sponsor development.

Why Denver? Because we need the European OSM community to come here and help promote OSM! The effect it would have on the nascent US community would be huge. A big meeting of European and American OSMers working together in a young, growing locality. Be here to demonstrate proven techniques, brain storm with creative groups on new ideas and enjoy a new, diverse multitude of friends who all share the same obsession. Come show US how it's done, help US grow. You DO want OSM to grow, right? You DO want our map to get bigger and better, right? That IS our common goal, right? or have I misunderstood the OSMness of what I was joining? Buuut if not, hey that's ok. I'll just sit here in the bar by myself...just me, my GPS, and a slightly damp walking papers printout. I'm not lonely in this vast territorial wilderness. /sniff

Note: We are looking into a group discount for travel to Denver! Stay tuned for more information!

For travelers in the US and Canada, Denver is almost equidistant from both coasts. Travel time is no more than 4 hours by plane from most major destinations in the contiguous 48 states. You can fly into Denver as cheaply as anywhere in the US (except, maybe Las Vegas). Internationally, there are direct flights to Denver from Montreal, Toronto, London-Heathrow, Frankfurt, and Vancouver.

Denver is on the California Zephyr Amtrak line from Chicago to San Francisco. For a truly epic trip, fly into Salt Lake City and take the Zephyr through the Rockies! Be sure to carry your GPS so we can update the rail lines when you get here!

Denver lies at the intersection of Interstates 25 and 70 (beautifully rendered in OSM by Peter Batty). Denver Regional Transportation District provides an extensive network of light rail and buses, including inexpensive bus service to and from the Denver International Airport. 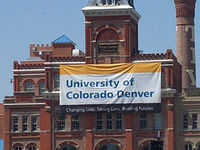 Possible venues for SoTM in Denver, through connections of the organizing team, are:

All venue options can provide ample space, WiFi, and projectors at a minimal expense.

Almost as importantly, there is a wide choice of good social venues for the all-important extracurricular aspects of the conference. Several members of the team have extensive experience in organizing outstanding social events in breweries :) !!

Denver enjoys about 300 days of sunshine per year. If you look at charts of monthly sunshine hours, you'll see that the darkest month in Denver is brighter than the brightest in DC! (knod to Jennifer Daniel's song Ohio). But that doesn't mean it gets hot: the average daily high temperature in June is 82 degrees. And just what is this humidity thing people in the East complain about? It's so dry in Denver, it's hard to actually break a sweat when you work out!

There is a growing community of OpenStreetMap contributors in the United States. The US OpenStreetMap chapter was formed in early 2010, and has __ members. In August 2010, the US OSM Chapter organized the first US State of the Map conference, drawing __ attendees from across the US and Canada (?). Colorado has a large group (50+) that meets several times of month. In the month of October, we have a mapathon, a sponsored training session with beer and pizza and two pub meetups.

The Front Range Users of Geospatial Open Source are active advocates of the use of Free and Open Source Software as well as free and open data. Geospatial Information Technology Association is the professional association and leading advocate for anyone using geospatial technology to help operate, maintain, and protect the infrastructure, which includes organizations such as utilities, telecommunication companies, and the public sector. The Metro State GIS Club has been involved with OSM events in the Denver area.

The US Geological Survey National Geospatial Program is headquartered in the Denver Federal Center (DFC) The National Map program has a strong interest in working with the OSM community. A Volunteered Geographic Information Workshop was held in Herndon, VA, in January bringing together individuals across a diverse range of volunteer efforts. One outcome of the meeting are efforts to further evaluate how USGS mapping efforts could be combined with volunteer efforts like OpenStreetMap.org to meet the national needs for a consistent map of the United States. A Denver-based SoTM could be instrumental in forging stronger connections between the US national mapping and OpenStreetMap communities.

The Denver Regional Council of Governments (DRCOG) fosters regional cooperation among county and municipal governments in the Denver metropolitan area and is a major geospatial information provider for the area.

Many large geospatial companies have big offices in the Denver area, and are potential sponsors of SoTM:

As well, Denver is home to many geospatial startups including:

Our experience with attracting sponsors for prior events make us confident that at least 50% and as much as 100% of that cost could be covered. At a 50% sponsorship rate, the cost to attendees would be $17.50/each. At this price, it is 107.50 euros cheaper than last year! A significant savings compared to previous SOTM. (the $17.50 each is based on the prior experience that a 200 attendee event would be held for less than $7,000 total)

This cost includes all facilities, lunch and refreshments, and an evening social event.

Based on prior experiences with the event venues and catering, a two-day SoTM event with up to 200 attendees in Denver could be held for *less than $7,000 total*.

Note to other organizers: I simply doubled the cost and number of participants from WhereCamp5280 in 2009 but based the attendee cost on the same level of sponsorship. I believe this is very conservative, both in the total cost and the amount of sponsorship.

If we can raise additional sponsorship money, we may be able to offer a limited number of travel scholarships to bring in attendees who otherwise might not be able to afford to attend.

The team of organizers for this event include people who have operated similar-sized events in the past, as well as organizing mapping parties for years. Their connections with local, national and international organizations greatly facilitate sponsor development.

The SOTM Denver organizing team has organized numerous other events, including WhereCamp5280 which will take place again this year on November 19th at the CU-Denver Campus in Downtown Denver. WhereCamp 5280 in November includes an Evening after party on November 19th and OpenStreetMap ski mapping at Winter Park ski resort on November 20th.

Last year was held August 14th & 15th at the University of Denver. The event attracted almost 100 participants including several from outside Colorado. The event was fully funded through sponsorship. Sponsors included ESRI, Bohanan Huston, dtsagile, PublicEarth, Enspiria Solutions, UMapper, AnyGeo, CAD-1, Spatial Networking and others. Attendance was free, and the event was held at the University of Denver in space sponsored by the Geographic Technology Applications Center. OSM was highly showcased, including a keynote by Steve Coast and a mapping party. The WhereCamp5280 organizers, Eric Wolf, Peter Batty and Ben Tuttle, would all be involved in organizing SOTM Denver 2011.