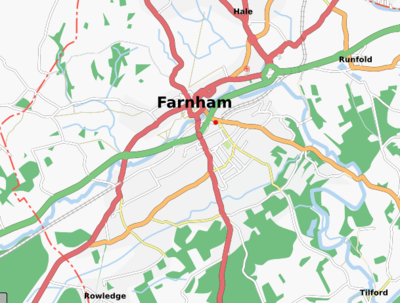 It was organised by TimSC and Breezer.

Saturday 6PM time at The Cobbett venue for evening food (and optionally beer).

Sounds good. Any objections anyone? --TimSC 07:17, 3 September 2008 (UTC)
No, I was considering suggesting that pub too. Lots of nooks and crannies to hide in, fairly dark interior, but I dunno how good the GSM signal will be ;). Nice patio out back if the weather's good tho, and they do basic food if you're there at the right time (err, I think) - and things like cold ham rolls, if they still do that. Anyone got an OSM sign to put on the table to help people find the group? It might be tricky otherwise, you can only see some of the seats from the bar. If you want to meet up Thurs noon/eve or Friday, message me. Breezer 12:02, 3 September 2008 (UTC)

A suspect Shaun(smsm1) will have his OSM high-vis jacket(has the logo quite big) that you could hang over a chair. I will have mine Sunday.

Sunday 10AM morning meet, Costa is open 9am-5pm on Sunday.

Farnham is served by railway to Waterloo (via Clapham Junction too, usu. platform 9), trains every half-hour during non-peak hours and slightly more frequently at rush-hour. Head down the hill from the station, over the A31 dual carriageway and keep going straight til you hit the town centre. There are busses to Guildford and a National Express coach stop in the centre (the main stop is outside the Queen's Head pub near the east end of Borough, and Costa is mere seconds walk further west near the top of Downing Street on the same side).

If you want to spend time doing tourist stuff while here, there's a castle up the hill (open only Wednesday afternoons as its actively lived in) and plenty of pubs to explore; Bird World is about 3miles south of the town and the old ruined Waverley Abbey isn't far either. Some people might say quaint, it has some interesting and unique shops rather than all chain stores (no M&S for instance, and only more recently a Starbucks). Commuter- and green-belt small-town Surrey... 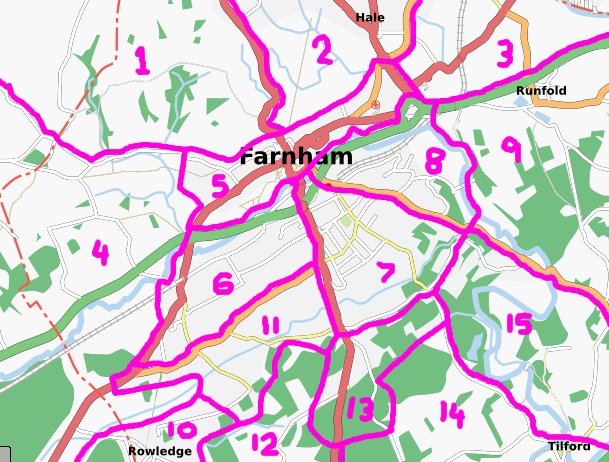 Area 6 looks like the most complex. Area 8 is the simplest.

4. LastGrape/Gregory (LwD) but I don't know that I'll get much done so I'm happy to share this slice.

Done section 4, except this footpath which needs checking. At the roundabout end it has changed slightly, at the Runwick lane it is very unclear and I didn't want to trespass through the farm to find there hasn't been a footpath for years (a nearby one had been moved considerably). Would be great if someone can walk it from the roundabout. -LastGrape/Gregory (LwD)

13. Done north area. (This is urban despite it looking like woods. The woods are from the old NPE map.)

(Apparently area 14 doubled for Germany in the film Gladiator.) 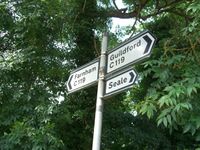