Buildings and objects in Madrid, Spain generated from OpenStreetMap data in Flightgear 2018. 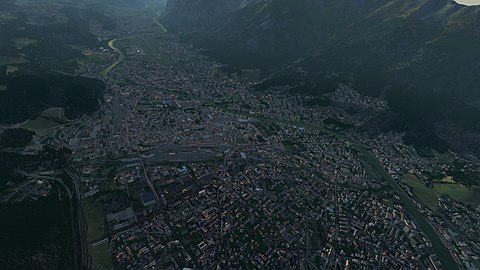 View over Innsbruck valley, Austria showing buildings, roads, and objects generated from OSM data. This is from the 1st build of OSM data for the entire world in FlightGear 2020 . 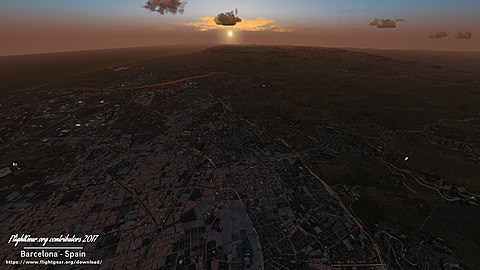 FlightGear) is an open source flight simulator. Since November 2013, the official scenery of the simulator makes use of OSM line data. Buildings, roads, and objects for the entire world were generated and integrated into the official scenery in March 2021, creating a 3d visualisation of OSM data. This OSM world-scenery is automatically downloaded as you fly by FlightGear 2020.3.7 LTS [1] and later.

Buildings, aerials, etc. are placed according to obstructions data etc. See the FlightGear Scenery Object Database for some examples.

Buildings, roads, power cables/pylons, railways, railway platforms, piers, and other man-made objects, as mapped in OSM, can be turned into 3D models for use in FlightGear scenery. This is done with a custom written python script. More information at the FlightGear wiki.

Buildings and objects for the entire world were generated for FlightGear 2020.x, and integrated into the official scenery which is automatically downloaded as you fly by FlightGear 2020.3.7 LTS and later.

Generated objects for countries and regions also available for download for FlightGear 2017.2 and later.