No longer maintained since 2015

GPS Navigation & Maps - Scout is a map and navigation app for iOS devices (iPhone and iPad with cellular support) and Android. It was made by skobbler and is now marketed under the brand Scout. It's using OpenStreetMap data with its own processing workflow. A bug report feature is implemented. Those bugs can be reviewed at a online tool called MapDust. There are plans to replace this tool with OSM Notes API or working out reports for creating MapRoulette challenges.

This new app replaced former skobbler apps that were known as Skobbler GPS Navigation and ForeverMap. 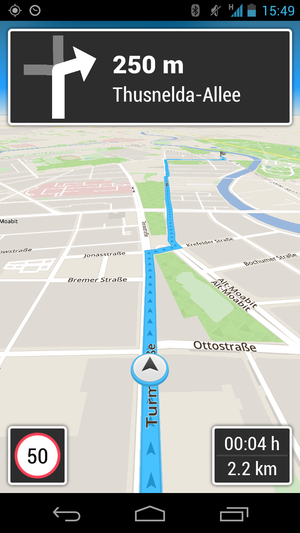 - online and offline map (one country is free to download, for other countries or map bundles you have to pay)

- shows speed cameras that were reported on the german platform blitzer.de (In-App-Purchase)