iOS is the native operating system of Apple’s mobile devices. iPhone, iPad, and iPod touch devices can be used to view and edit OpenStreetMap-based maps as well as to record GPS tracks that can be uploaded to OSM to aid in editing. 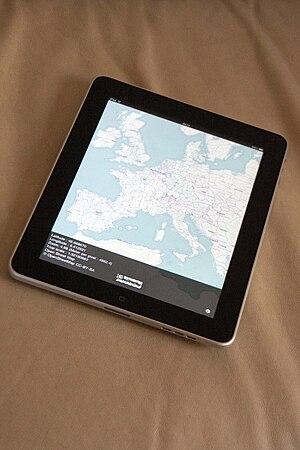 OpenStreetMap on an iPad

The most basic way to use OpenStreetMap on your iOS device is to open www.openstreetmap.org in a Web browser such as Safari. The website is optimized for small screens such as those found on iPhone and iPod touch. For a map-viewing experience similar to that of the built-in Maps application, check out the applications below. Similarly, for contributing to OpenStreetMap, the iD editor embedded on the website supports basic interaction on iPad, but you may find an iOS editor application to be much more convenient.

These applications provide turn-by-turn navigation and, in many cases, voice guidance:

It is also possible to load OpenStreetMap-based maps into the following applications:

These applications allow you to contribute to OpenStreetMap:

These applications allow you to contribute imagery for armchair mappers to use:

These applications let you search for and learn about places on the map. Many of them also support offline maps.

Main article: Games#In the game itself

These games rely on OpenStreetMap data to power gameplay:

These applications also use OpenStreetMap in some fashion:

As a platform for developers, iOS is very similar to tvOS, watchOS, and to a lesser extent macOS. Several libraries make it easy for iOS developers to incorporate OpenStreetMap in their own applications, whether as a static map image, a fully interactive map, or more sophisticated uses like geocoding and routing. Another benefit of using these libraries is that they respect OpenStreetMap’s tile usage policy by fetching tiles and other resources from dedicated servers instead of OpenStreetMap’s donated servers.

The following libraries are no longer maintained but are of historical interest: