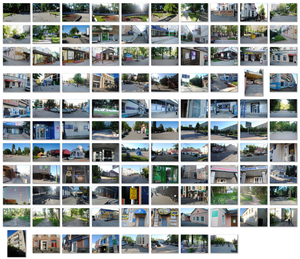 Photo mapping, a popular mapping technique, can be a great timesaver - it can be far quicker taking photos of street signs or points of interest than either to write it down, typing on a smartphone, or using waypointing on a GPS gadget. What's more, smartphones and cameras can often add GPS coordinates, making it easy to match up the photos to the exact position they were taken.

Use your camera to help you remember stuff. It can be as simple as that!

You don't need to use GPS and other advanced tricks described on this page. This is particularly true if you're in an area with good bing coverage (makes it a lot easier to get things in the right place) and if you have a good memory for this kind of thing. You'll need to remember the path you walked and the direction you were facing when you took the photos. To aid your memory it's always a good idea to input map data as soon as possible after collecting it. Also the more photos you take the better. If an area of one photo is visible in the previous photo, it makes it easier to orientate when you're looking back over them.

Even if you have a GPS track, it can be difficult to determine the way you were facing when taking a photograph. You can develop your own tricks to solve these problems, but here's one approach: Simply rotate the camera: landscape pictures for what's ahead, portrait-size for infos about the way you just came from and a rotation of +/- 45° for what is on the right/left of the road. Pretty low-tech, but sufficient most of the time. You can also work out orientation using the angle of the sunlight in the pictures.

Smartphones and some cameras come with in-built GPS (and some GPS units come with in-built camera) so these devices will typically write geolocation data to the image file's metadata (EXIF) each time the shutter is snapped. This is very easy with a smartphone, although you may need to enable it. It makes things much easier. Tools such as JOSM will generally use this geolocation metadata.

What if you're using a camera without GPS? You might work with two separate gadgets, a camera and GPS unit. Digital cameras add the date and time to each photo (in the EXIF data), and a GPS tracklog will allow you to correlate by time, matching up the photos to the exact position they were taken. See JOSM/Photomapping if you want the photos to display in the proper location in JOSM, or see Geotagging Source Photos if you want to add geo-tags to photos that don't have them. 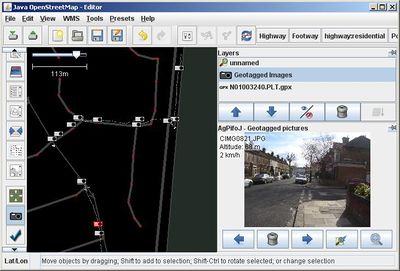 Editor integration is available for Potlach (Potlatch/Photo-mapping; KML), JOSM (JOSM/Photomapping), and Vespucci ([1]). iD currently does not support photo mapping outside of using mapillary or KartaView.

If you want to tag an object (node, way etc) to show that you positioned it using a photograph and not GPS data (perhaps a fence you didn't walk along running directly between two places already on the map), use source=photograph. If, more commonly, it's the name of the object that you got from the photo (e.g. a street name), use source:name=photograph. Similarly, for road numbers (e.g. ref=A305), use source:ref=photograph.

There's nowhere within the OSM project for the photos themselves to be stored. If you upload them to a website such as Flickr, you can use e.g. source_ref=http://example.com/123.jpg (or source_ref:name=* or source_ref:ref=*) to link the photo to the object.

If you're using the Annotation Presets with JOSM, it'll suggest the right tag at the right time, and you won't need to worry about which one is which!

You should add the GPS positions to your photos, see Geotagging Source Photos. 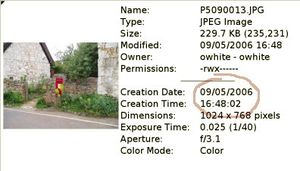 More software and information about writing location in the pictures' metadata can be found on the Geotagging Source Photos wiki page.

Some Nokia camera phones do not include date information in EXIF headers, causing JOSM and other tools to fail. The date and time can be copied from the file creation time using the useful Perl library and command-line application ExifTool : $ exiftool -P '-FileModifyDate>DateTimeOriginal' *.jpg

If you get any better sunny weather / picturesque photos (not just pictures of a street sign) while you're out mapping...