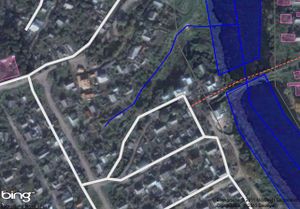 Only use sources for which we have explicit permission or have a compatible license or are out of copyright (often difficult to determine).[1]

Tracing OpenStreetMap from aerial imagery — a kind of 'armchair mapping' — may seem like a 'no-brainer'. What could be better than mapping from the clear, high-resolution aerial photos available in iD, JOSM, and the other editors?

In fact aerial photos have multiple potential problems, which this article touches upon. Self-verified data is the better data to have: the most valuable mapping involves visiting an area and doing ground survey. Your 'background' local knowledge can contribute, but remember that even that 'knowledge' can get outdated.

The exact placement of roads and other features can be assisted by recording GPS tracks on the ground. Aerial images clearly provide useful assistance in the mapping process, but it can be a bad idea to move map objects created by others just to match them to aerial images. Aerial imagery may be distorted and shifted relative to real object locations.

In some areas there are available aerial imagery and LIDAR data of such good alignment that they are superior to GPS tracks. Note that not every high-resolution imagery is also well-aligned one.

As a background layer within editors, we can use Bing, IRS, Landsat, and some others. All of these can be used to create and modify objects, but consider that each may have an offset or other kinds of distortions.

Initially, tiled imagery starts life as individual photos, taken from a satellite or airplane, tagged with a center coordinate (which itself is subject to errors, see below on GPS). The photo's corner coordinates can usually be derived from height-above-ground and lens properties. With that, special software can be used to transform it into a projection that is more commonly used with OSM map making. This transformation is not perfect, and may induce distortion and position errors.

Because there is, in any case (even if Earth was flat), perspective in the picture, objects may appear to skew to the side the higher above the ellipsoid they are, so this affects high-rise buildings, mountains, and roads going up/down hills. Perspective exists because the camera is only above one certain point at any time. The perspective problem can only be countered by taking more overhead pictures per distance, and combining them.

GPS tracks, too, can have inaccuracies. As satellites pass overhead, your position may be trilaterated with improved or degraded accuracy over time. Limiting factors include weather conditions, atmospheric interference, suboptimal reception (dampening), reflections off objects (in particular, dense urban areas with high-rise buildings), and obstructed sky view (when recording tracks from the inside of a vehicle). Selective Availability (intentional dithering of the position) making decreased accuracy for civilian users and enemies, but was disabled by the US Government in the year 2000 [1].

The result is that GPS tracks will frequently have an offset from reality. Whether the recorded data is better or worse than imagery is dependent on the particular area being observed. This GPS error may correct itself, or get worse through the duration of a long recorded track. All GPS devices give similar data and similar problems. Many GPS devices are capable of recording this error, culminating it in something called dilution of position (DOP), sometimes separated into horizontal and vertical components (HDOP/VDOP). GPS applications may also be showing it visually; the popular OsmAnd application draws a translucent blue circle for it around your marker.

While it is not necessarily better to rely on a GPS trace for accurate positioning, it can be more accurate than aerial imagery in some areas. A GPS trace may, in fact, be the only sensible data source in certain situations, such as when imagery only shows tree canopies of a forest without revealing the paths below, for example.

By recording several tracks, that is, going your route twice, three times, or more (perhaps even on different days), the track can be averaged out and may help identifying GPS traces with a bad initial fix. However, having too many tracks of the same roadway can make visual averaging harder by increasing the width of a spread.

Before adjusting aerial imagery, you need to choose certain "known" reference points, i.e. data points with known locations, or at the very least, locations with the least error. Such reference points might include:

In any case, do not rush to move objects created by others! Make sure your offset is more accurate — or just contact the mapper. The mapper possibly used their own tracks but did not upload them to the server. Or, to the contrary, they used imagery with lower resolution. Start moving objects on the map if you are completely sure your offset is accurate.

The imagery offset is not stored between sessions

Can use data from Imagery Offset Database, or you can manually create a correction and, if you want to save it to the database.

To offset imagery, click the right mouse button at the imagery layer or, in the menu «Imagery», open «New offset», or use imagery adjust button in toolbar:

If you know offset values, you can enter them, or move picture (using mouse or keyboard) until tracks or map objects will be matched depending on your favourite method. With the opened window, you can look around an area to check if the offset is similar. After mapping, you can bookmark the offset inputting name for future use.

Authors never use this editor, but it is known that you can offset imagery similarly to Potlatch by holding «space» button.

After the offset has been specified, you can start editing, but remember to move away from the initial area, and keep checking offset and to move the imagery again if necessary.

Strava provides a layer of GPX traces heatmap, that can be used in iD or JOSM. This layer allows to align the imagery with thousands of GPX traces collected by sportsman (cycling, hiking, walking). You need to subscribe to Strava, install a plugin in your browser, log in to Strava, and copy the WMS URL.

For more information about including this layer, you can visit: Tutorial Strava High Resolution Layer + OpenStreetMap (JOSM or ID). Note that the tutorial does not refer to Strava subscription. Probably because it was not necessary at the time it was written. 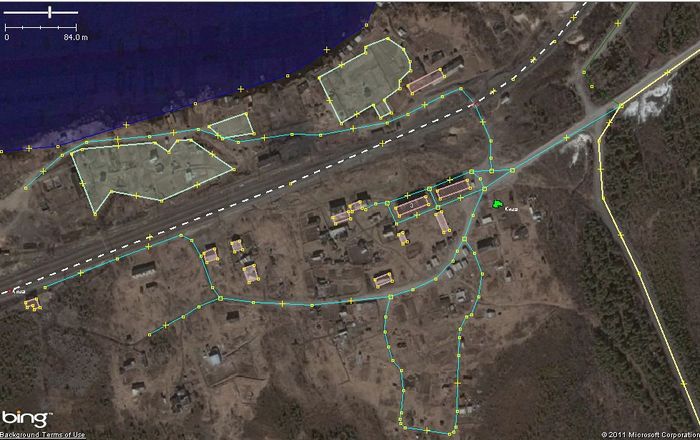 It looks like everything is OK in this picture, and the roads are placed correctly, but take a look at the next picture. 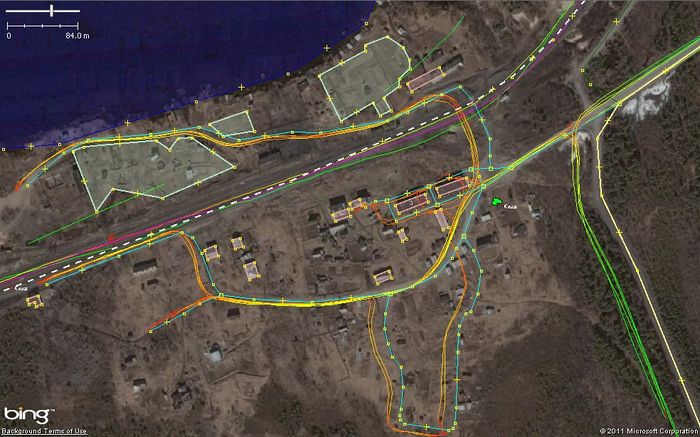 In this picture you can clearly see roads are offset around 20 metres (65 feet). Match imagery with GPS tracks. Move all roads' nodes and set buildings according to the shifted imagery. 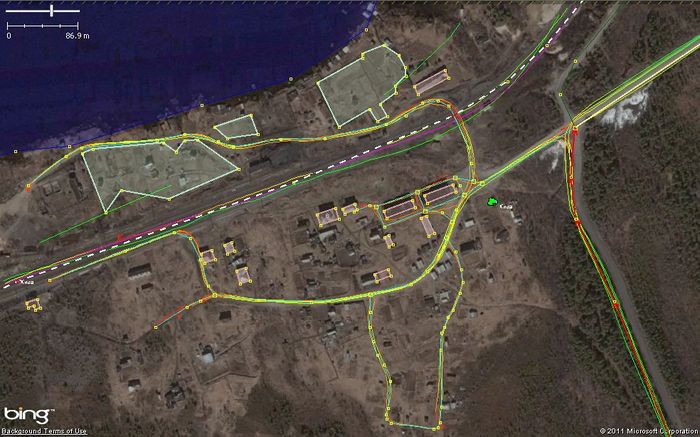 Now it's much better. In this picture you can see the road (marked red) is still not matching imagery layer, because the village is in the valley and road is on a hill. It has lead to change of imagery offset, and we need to move it again, but in this case it's easy just to use tracks.

There have been a number of ideas for approaches to allow experienced users to share offsets, storing them on the server and perhaps even applying the corrections automatically within the editors.

The Russian IRS layer has undergone a process discussed on the forum : https://forum.openstreetmap.org/viewtopic.php?id=6817

The True Offset Process was a project/discussion on something similar for any imagery, but particularly bing.