It has been proposed that this page or section be merged with Aerial Imagery. (Discuss)

Vertical aerial photographs are valuable sources of data for OpenStreetMap. While surveying by collecting GPS tracks is the primary way for collecting data, tracing features from an overhead photograph makes inputting vast amounts of data quicker to be filled in and verified later via on-the-ground surveying. A couple of prominent examples of OSM data initiated via tracing from photos are the Gaza Strip and Baghdad.

These photographs are usually taken from satellites. Companies like DigitalGlobe and GeoEye and U.S. Government projects like Landsat provide satellite imagery for free or for a licensing fee.

Aerial photographs can also be obtained from drones, airplanes equipped with cameras, balloons, or any airborne device fitted with a camera.

Sources already in use

In November 2010, Bing (Microsoft) gave us special permission to use their imagery to create our maps. It is supported in iD, Potlatch 3 and JOSM. See the Bing page for details.

(Tracing source attribution is usually done as source=Bing (⅔ of the usage) or source=bing (⅓ of usage)).

Published 09 April, 2014 DigitalGlobe in partnering with MapBox have given the permission (see MapBox ToS) to use their imagery provided through MapBox Satellite service to be used for OSM tracing purposes. The imagery is available in iD and JOSM, among others. The resulution varies between zoom level 12-17 (world coverage) down to zoom 19 (in selected parts of U.S. and Europe, and smaller areas everywhere).

Yahoo! Aerial Imagery was used between 2007 and 2011. In september 2011 Yahoo partially shut down their service and partially changed their imagery source which resulted that the imagery is no longer useable for tracing purposes, as we have no permission to do so.

This page is being considered for cleanup. Please discuss this page.
merge it here

See Aerial Imagery for a directory of sources that can be readily used in OSM editors.

Sources that are governmental, historical or otherwise assumed not for profit.

The interface is easy, but you may be confused because there's no actual photos online - it's just a catalogue of the photos, which then have to be bought from the University. They started taking photos in 1947, so I assume some are out of copyright by now. They're also mostly of open countryside, and have a restricted field of view, as far as I can tell, so may not be much use anyway.
The interface has been replaced with a new slippy map viewer (and an OSM background) using code cloned from CycleStreets! Photographs not viewable on the site - see the info page for updates. - Martin (I work at Geography)

There are many documented examples of homebrew vertical aerial photography using Balloons, Kites, UAVs etc. This potentially offers an approach for obtaining open licensed imagery cheaply and on-demand in particular area. Typically it's fairly easy to get very high resolution imagery, but difficult to cover a significant area, due to the limited height.

The limits can be both of technical and legal nature. There are legal restrictions on flight altitude which differ per country and within countries are most strict over big cities. Flights of every kind of airship (including kite) are additionally restricted in proximity of airports. It is important to know the local airspace regulations relevant to a given kind of airship. In the light of law balloons, kites, model aircraft and UAVs are each a separate category and different restrictions may apply. It is often possible to obtain a permit to make a given flight from an airspace controlling body but request may need to be submitted with advance. In some situations it is a good idea to notify the body even if a permit is not strictly required.

Open-source software for rectification (not so much for georeferencing) of the imagery is scarce, some work is ongoing. Georeferencing is an easier task and can be done with programs such as QuantumGIS or the Map Warper website using the GDAL library, including some basic deformations of the images. Quality rectification of imagery is more difficult however because it needs software that can understand the camera optics. It is also possible to rectify an image using just a huge number of control points in programs like QGIS or a simple graphics editor (Gimp, Photoshop) but it is very time consuming and results can leave a lot to be desired. Additionally the area must either be very well mapped or reference imagery must be available for adding control points. Some possibile solutions are: (links needed)

The Public laboratory for Open Technology and Science maintains a series of kits and how-tos on balloon and kite mapping techniques, as well as the browser-based Mapknitter for stitching over satellite imagery. Mapknitter synchs with Open Aerial Map to enable easy OSM tracing.

OSMer User:Balrog has been experimenting with kite mapping 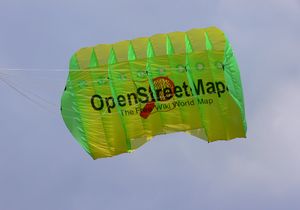 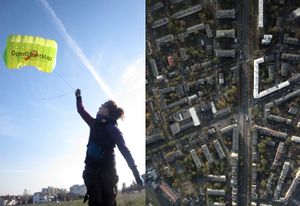 He has managed to create some tiled rectified imagery using a process involving Hugin: http://ooc.openstreetmap.pl/kap-warsaw.xhtml (firefox)

User:Mikel has a funny video somewhere of crashing a kite in Palestine. link?

Summary: Kite equipment may be a little more expensive than hand-made balloon, but helium is not used up such as with helium balloons which need to be refilled often. Transportation is also easy because the "Sutton flowform"-type kites are fully foldable to small size packets (laptop size). "Sled" kites (PowerSled and similar) can also be used. They normally have a plastic frame but can also be flown without the frame. As with balloons, weather conditions are also very important and it may be impossible to make a flight in one location for long periods of time. In cities considerable space is needed for a start so it may be impossible to photograph some densely built-up areas at a good angle.

The bigger RC helicopter and airplane models can provide enough lift to lift a quality compact camera (100 - 150g) without problems, and some can lift a SLR camera. Reaching useful altitudes (500m - 1000m) may be difficult with standard radio control due to high levels of interference in the cities, and battery life.

Model airplanes have the disadvantage of requiring some space for landing. They can possibly cover bigger areas than RC helicopters because very little battery power is used for horizontal movement if the model has a good gliding ratio. Julio Costa from the Chile OSM community has been experimenting with an RC airplane, seemingly without much success yet (flickr stream link). RC airplanes are probably cheaper to use than quadcopters because of mass production. Some of the cheaper models capable of lifting a 150g camera cost EUR150 to EUR200 in Europe.

RC helicopters should be much better adapted to city environment and are still a little cheaper than quadcopters. They are however difficult to steer and need a lot of training before a successful flight (not followed by costly repairs). The cheaper 6-channel models (such as the E-sky Belt CP series) capable of lifting a compact camera are EUR150 to EUR200 in Europe. RC helicopters are very sensitive to added start weight and control is even more difficult with the camera attached. There are reports of someone lifting over 1.3kg with a Belt CP helicopter (but it became almost uncontrollable). 3-channel RC helicopters of the same size are much cheaper (EUR50 to EUR100) but it's not confirmed that they can be used for lifting a 150g camera. User:Balrog is experimenting with some 6-channel E-sky helicopters. 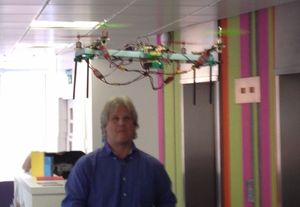 Any modern model of DJI quadcopters are suitable for obtain aerial imagery. Just take top-down video, or photos with 80% overlap.

The OSMers behind OpenStreetPhoto were developing a quadcopter (2009). Currently the blog seems to indicate they decided on a ritewing RC airplane instead, blog is in Dutch though.

According to their wiki, their max. budget for a single quadcopter unit was EURO2500. As quadcopters come into more mass-production they will be becoming cheaper, similarly to RC models of helicopters and planes, which are currently much cheaper despite sometimes higher level of complexity. There are already companies building toy or just-a-little-too-big-for-a-toy quadcopters, operating since 2010. For example the Gaui 330 is an interesting model. Though definitely too small to lift a SLR camera, it can possibly lift a compact hi-res Canon (some 14MP models weight in the range of just 130 grams). They are already much cheaper (EUR299 basic model) than microcopter.de self-made quadcopters or the commercial aerial-imagery platform offerings.

Quadcopters may have the same problems with battery life as model aircraft.

They can however fly autonomously if programmed before the flight so the radio range may be less of a problem. Due to the possibility of autonomous flight a quadcopter counts as an UAV and not a model aircraft in some jurisdictions (at least in Poland) and may in theory require airworthiness certification in controlled airspace, unlike model aircraft. In France aerial imagery using such autonomous vehicles without a certification and authorization is strictly forbidden (and could bring to severe penalties) for security reasons without a prior agreement with authorities over inhabited areas or in airspace operated by licenced helicopters.

A list of WMS-sources and links for integration JOSM and potlatch can be found here:[3] and here Germany/Luftbilder

The national portal of cartography, operated by the ministry for environment, offers good aerial imagery to trace from covering the whole country (2006) and newer ones for the regions of Lazio and Umbria (2008). More information in Italian here: Italy/PCN. The links to enter in JOSM are: