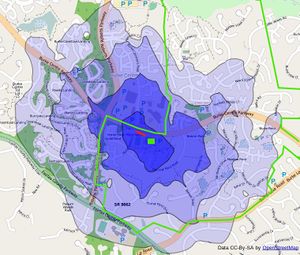 An isochrone is an isoline for travel time, that is a curve of equal travel time. Closely related is isodistance, which is a curve of equal travel distance. Typically these are based upon following transportation routes such as public transit, roadways, or foot paths rather than using a simple circle (a.k.a. buffer of a point, "as the crow flies" distance). This article will use the term isochrones, however any weighting factor can be used such as distance, or even a combination such as safety and time.

Starting with a transportation network, such as OSM, we must create a shortest path tree (SPT) using something like Dijkstra's algorithm. This results in a set of points with associated travel times. This data isn't very meaningful by itself, but it can be transformed in several ways to create a useful result.

For all of these methods it is best to interpolate along edges to ensure the maximum weight is represented (i.e. it is unlikely an intersection node will be at the exact max weight). Which method is chosen depends on the goals. For a pretty picture filled contours are likely the best choice.