UtilsPlugin2 is another collection of useful tools as follow up to UtilsPlugin now included in the JOSM program.

The functions are accessible via the More tools menu, Selection menu, and shortcuts. 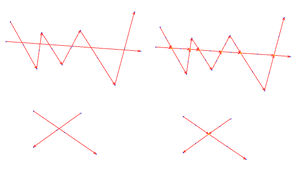 Adds nodes at the intersections of two or more ways (linear or closed). Selected ways will not be split. 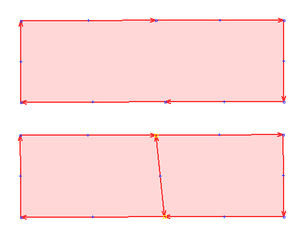 Similar to Align nodes in line, but uses a parent way as context. The behaviour depends on the current selection:

In a similar way that a single node is shared by two ways and you like to unglue it, there are sometimes two relations (e.g. multipolygon) that have the same object as member (e.g., the boundary way). This tool creates a private copy for each parent relation. (So in the example, the two multipolygon areas can be separated.)

Substitutes the geometry of one object for another retaining as much metadata and history as possible. There are currently two supported modes:

Replace one way with another way

In some cases it may be faster or more convenient to draw a new way rather than adjust the existing one, but you want to retain the history. Some or all nodes of the old way are moved to positions of the new ones, and some nodes are transferred between ways. Then the new way is deleted, having played its role. This is done to preserve way and node history as much as possible. For example:

Replace a node with a way

Sometimes you may encounter a node for a feature, like a restaurant, but you have imagery with sufficient detail that you can trace the building outline. Or perhaps you've encountered a situation where the same feature is represented with both a node and a way, violating the principle of One feature, one OSM element. In either case, select the node and the way, and the Replace Geometry action will replace (upgrade) the node with the way, retaining as much history as is possible.

Note that any combination of uploaded/new node and way is accepted. The node is always replaced in favor of the way.

Similar to R button in Potlatch. The tags from the previously selected object are added to the current selection. So, to copy tags from one way to another, you don't need to copy then paste; just select source way, then the target way, then invoke this tool. When you change the tags of an object and select another object, Shift+R will paste the tags of the modified object.

Simplifies setting source=* for new objects. It remembers which source was specified last, and pastes it with just one click. It is not needed to enter new source tag value for the action to remember: you may click twice on any object with needed tag value.

Similarly to Paste tags, the selected objects are added into relations that contain any of the objects in the clipboard, with appropriate roles if they can be determined.

Open URL in default browser with data from selected node or location of center of the screen. Add settings to preferences/utilsplugin2-tab or customurls.txt in JOSM folder.

Spreadsheet like editing of tags (cons: tags are untranslated)

Allows to choose which keys are displayed and search for all items which have values for those keys and edit their tags.

Example of usage: select one node (and possibly its way), press E (three nodes are selected now), press L to put the node on straight line.

Selects all ways connected (possibly via intermediate ways) to the current selection.

If some ways are selected, selects all adjacent and intersecting ways recursively. Useful for selecting parts of the building to join.

Installation is done via JOSM preference as described in JOSM/Plugins, section installation.