OSM History Viewer (available on http://osmhv.openstreetmap.de/) is a change monitoring and debugging tool 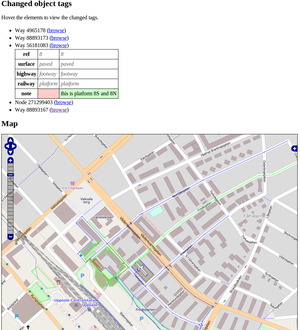 With OSM History Viewer, you can visualise the changes that were made in one changeset compared to what things looked like before. It shows all tags that have been removed or added to elements and visualises how nodes and ways have been modified, moved, created or removed. Later it will also be possible to see how a relation was changed in the changeset.

To visualise the changes, all ways affected by the changeset are turned into 'segments', where one segment represents the connection of two nodes. Each segment is then analysed to determine whether it was moved, created or deleted in that changeset. If a segment, or its location only existed before the commit, it is marked red on a map. If a segment, or its location only exists after the commit, it will be marked green. If a segment did not change, it will be marked blue.

This method has the following effects on the visualisation:

This method has the great advantage over the simple displaying of the changeset content that you can see how the objects on the map actually have changed (and not how their data representation in the OSM database has changed).

With “Relation Blame” you can find out which part of a relation has been added to it by whom. The relation (including all its sub-relations) is split into segments (segments being connections between two nodes) and then the history is searched for the first occurrence of these segments in the relation. By this you can find out who added a certain part to the relation in which changeset (and then “blame” them ;-)). This segment-based method has the big advantage that people just splitting ways will not appear to have added a way to the relation (even though they technically did). A “wrong” author might still be displayed though if someone added some nodes to a way of the relation (for example by connecting another way to it or by improving its accuracy).

Easy ways to use

On [1] there is a Greasemonkey script that adds links to OSM History Viewer to the relation and changeset pages on www.openstreetmap.org. That script is currently broken in opera/chrome. Fixed version

Use a bookmarklet to conveniently access the Changeset Viewer! By clicking on the new bookmark (or opening it via a keyword) while visiting a changeset page such as changeset 6798641, you will be redirected to the analysis page for that changeset. (Credits to Eugene).

Use the following code instead to open the OSMHV analysis page in a new window/tab (allows you to switch between the changeset and OSMHV view):

TODO: One for the "relation blame" feature.

The source code is available under AGPL-3 on GitHub. The project is maintained by User:Candid Dauth.

Bug Reports and Features Requests can be submitted on GitHub.