From OpenStreetMap Wiki
< Kosmos(Redirected from Kosmos v1.x)
Jump to navigation Jump to search 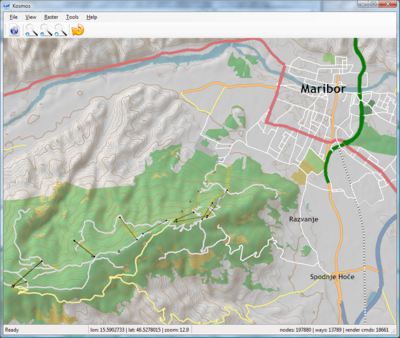 Kosmos is a new lightweight OSM map rendering platform developed by Igor Brejc (User:Breki). It was primarily designed to be used by OSM users on their own computers to:

These are the main differences between Kosmos and Mapnik and Osmarender. Kosmos was designed to be as simple to set up as possible, without losing much of rendering capabilities.

What Kosmos Is NOT

It is not a replacement for Mapnik or Osmarender. Kosmos currently does not use a database to store OSM data. Instead it opens OSM files and loads them directly into memory. That means that there is a limit of how large a map area Kosmos can work with.

Kosmos rendering rules are much simpler than those of Mapnik and Osmarender. On one hand, this enables easy creation and maintenance, but on the other hand it is not as flexible as XSLT transformations to SVG used by Osmarender, for example.

Kosmos uses Microsoft.NET GDI+ library for drawing maps, which directly provides only a subset of graphics capabilities compared to those of SVG. That means that certain graphics features are currently not available to use in Kosmos map rendering. Hopefully this will improve with time. 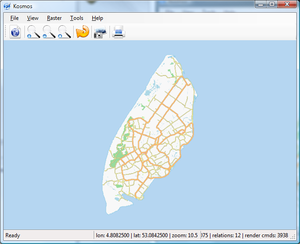 The primary platform for Kosmos is Windows. You need to have Microsoft .NET 2.0 (available here) installed on your computer in order to run Kosmos.

Kosmos can run on Linux and Mac OS systems if you have the latest version of Mono installed. There are some problems, however, since Mono does not support all of the features of .NET Framework. Also, the quality of rendering using Mono is not so good compared to the Windows platform. Hopefully this will be improved in the future.

The following procedure describes how to set up Kosmos to show a sample OSM map:

Kosmos uses OSM XML files as the source for map data. These files can be obtained by various means, most typically by using JOSM to download map data from the OSM server and then saving the data into an OSM XML file.

Kosmos can be used both for interactive mapping and as a HTTP tile map server. In both cases you need to have a Kosmos project file defined which tells Kosmos which OSM files to use, which rendering rules to apply and some other things.

First steps to create your own map:

1. Open the desired area in JOSM.
2. Save the area as MyMap.osm (or with a filename of your choice) to the Kosmos/Samples folder.
3. Open the file "SampleProject.xml" with a text editor and enter the name of your area-file in the following line: (now there is MyMap.osm).

4. Save the file.
5. Open Kosmos.Gui.exe
6. Go to menu "File" and "Open file" in the upper left corner. Open the file "SampleProject.xml".
7. Your area should now appear. If an error message appears, perhaps you should try to save a smaller area in JOSM.

Interactive mapping is done using the Kosmos.Gui. When you run it, you can open a Kosmos project file and the application will load OSM data and rendering rules and it will show the map.

NOTE: If you add the path to the project file in the command line, Kosmos will load it automatically when it starts.

Kosmos.Gui application is able to automatically download SRTM3 digital elevation model (DEM) from the NASA FTP site. It can then use this DEM to generate 3 different types of rasters for the area currently shown on the map:

The first time you generate the relief for a certain area it may take some time for Kosmos.Gui to download the DEM tiles. Once they are downloaded, Kosmos.Gui stores them into a local cache (Srtm subdirectory) and they do not need to be downloaded again.

NOTE: SRTM3 data has voids, so the relief might not look very nice for some areas. Void-filling algorithm (or support for already void-filled data) is planned for a future release of Kosmos.

By default the whole map area will be printed. If you want to print just a portion of the area, select the View|Show Print Area menu option and click on the blue rectangle to select it. You can reposition the rectangle by moving its corners. Also, you print the currently displayed part of the map by selecting the Print Area|Use Current View menu option.

Instead of printing directly onto paper, you can export the map into a PDF file. This is not implemented directly by Kosmos. Instead, install some PDF printer driver (I tried this free one) and print to that driver. The driver should then save the PDF file on the disk.

Kosmos is able to run as a tile map service similar to OpenStreetMap slippymap. This can be achieved using the Kosmos Console command line program.

You first need to generate map tiles. This is done using the tilegen command:

This command will generate tiles for the sample project, from the zoom level 0 to the zoom level 17. The tiles will be stored in the Tiles subdirectory.

After you've created tiles, you can start the HTTP server using the tileserv command:

Now you can go to your browser and go to URL http://localhost/Kosmos and you should see a slippymap with the sample map.

NOTE: You can of course generate tiles even while running the HTTP server, just open a separate command line console. Some browsers may need refreshing of page to detect new versions of tiles.

Serving Your Own Maps

The procedure described works with the sample map which comes together with Kosmos. If you want to serve your own maps, see instructions on editing Kosmos project files.

Kosmos project file is an XML configuration file used by Kosmos. The supported node are as follows:

Here is an example of the project file:

One of the most interesting features of Kosmos is the ability of users to define how maps should be rendered by writing definitions in OpenStreetMap Wiki pages. One example of such a page is KosmosStandardRules page, which is intended to contain rules for rendering standard maps.

Kosmos is currently in beta phase and is being continually improved. If you discover any bug, please report it under the Talk:Kosmos or Kosmos knowledge base page. Thanks!