One of the most interesting features of Kosmos rendering engine is the ability of users to define how maps should be rendered by writing definitions in OpenStreetMap Wiki pages. One example of such a page is Kosmos General Purpose Rules page, which is intended to contain rules for rendering standard maps.

You can also save the raw contents of the rendering rules Wiki page into a file and use this file in Kosmos instead (see FAQ).

If you have any questions about using rendering rules, maybe a visit to Kosmos FAQ page will help.

Rules have to be entered in one or more tables as seen on the KosmosStandardRules and Kosmos General Purpose Rules pages. Anything outside the tables is ignored by Kosmos and can be used for writing comments or separating the Wiki page into several sections (which is highly recommended, since you can then edit portions of rule list separately).

Each row represents a single rule:

The table column's are as follows:

By giving the rule a name which starts with a dot, you are specifying that this is a child rule of the parent rule (parent rule is the first non-child rule that appears before in the table). Example:

What does this all mean? We are specifying that all ways tagged with highway=secondary will have their names rendered as text. Also, all such ways which represent bridges will be drawn using a polyline with a thicker border. All other ways (non-bridges) will be drawn using a normal border width.

Child rules compete for the right to be rendered. The first child rule that meets the selector criteria will be used to render an OSM element. All child rules (of the same parent) after that will be ignored for this OSM element.

Any Targets or Options specified for child rules are ignored by Kosmos.

Sometimes you want templates specified by child rules to be rendered before those of the parent. In this case, specify ChildrenFirst option for the parent rule.

It is possible to set more than one tag for each rule. This means that only those elements which have all of the specified tags would match the query. So for example:

would select all Chinese food restaurants whose names are 'Hot Rat' (not that I know any ;) ).

NOTE: complex expressions are an experimental feature at the moment. The syntax described below will probably change in the near future (it will be simplified). Also, I will try to make expressions evaluation less performance-intensive.

Kosmos currently uses Flee library to evaluate complex expressions. Check out the link to see all the available operators.

Three specials functions are provided by Kosmos to be used in the complex expressions:

Be sure to read Kosmos Rendering Help#Performance Considerations regarding the use of complex expressions.

Kosmos templates are graphical representations of OSM elements on the map. Currently these are templates which can be used:

Each rule can have one or more templates (the example above uses two). Each template has to be its own line, example:

NOTE: Since version 2.3, icon template can be used for nodes and areas.

Colors can be entered as HTML color names, examples: "black", "white", "red", "#00FF00". Also, Kosmos supports the ARGB scheme, which means that you can also specify the alpha value of the color. This can be helpful if you want to use transparency effect. Example: color "#80FFFF00" means half-transparent yellow. The lower the alpha value is, more transparent will the template be.

Zoom factor values allow you to specify how the certain property will change its value according to the zoom level. Basically, you specify the property values for certain zoom levels, and the rest is calculated (interpolated) by Kosmos based on known points you specified. Example:

You can specify as many known points as you like. In addition, zoom level need not be an integer value.

The following values are currently supported:

We may be able to take examples and supported values from [3]. -LastGrape/Gregory (LwD)

These are some additional options which can change the behavior of the template. Currently only one option is available: EliminateSeams. 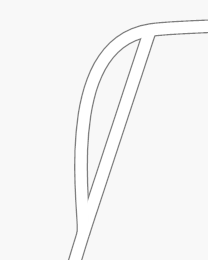 EliminateSeams can be used on a polyline template. If this option is turned on, Kosmos will try to connect all the ways of the same type before actually drawing them on the screen. This means that seams are then eliminated.

However, this only works for ways rendered with the same rendering rule. Also, seam elimination prevents using Curved=true option for ways, since the combination can get ugly. On the example image, three ways are drawn instead of two.

Obviously, seam elimination algorithm has to be improved in the future.

Kosmos draws OSM elements in a certain order. This order defines what element comes above other element. Elements which are drawn first can be come partially or fully covered by other elements. More on this on Kosmos Layering.

In order for Kosmos rendering engine to draw as quickly as possible, following things should be avoided, especially when rendering a large OSM data set:

The rendering engine has certain limitations, most of which stem from the fact that it uses .NET GDI+ for rendering. Also, since the engine is still in development, there will be continual improvements.

Things still to be done: