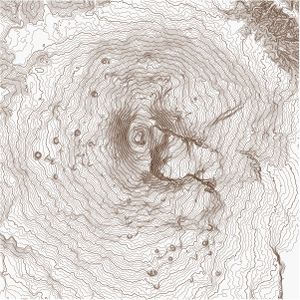 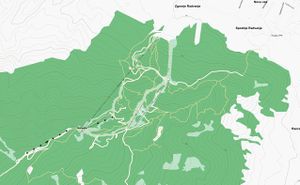 OSM data together with contours 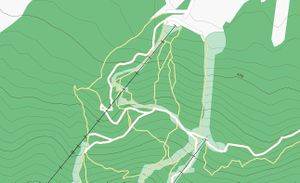 NOTE: It is not intended to upload such contours into OSM database, but to improve OSM output. So do not try to upload the generated data to OSM server!

The tool was originally developed by Igor Brejc (User:Breki), but is no longer supported by him. The current version 1.14 is working and was built by Michael Bemmerl (User:Michi2). The tool is mainly build for running on Windows, but also works on Linux (see Running On Linux). For alternatives you may want to look at the Alternatives section.

A great example of using Srtm2Osm generated contours in slippy map is in the Freemap Slovakia.

You can see some other examples of terrain generated by Srtm2Osm and rendered using Osmarender on this page. The area shown is around Maribor - Slippy map link

The latest version of the tool can be downloaded from here (signature). You need to have either:

installed on your computer in order to run Srtm2Osm.

Older entries are available in the release notes file.

Srtm2Osm works from a command line. Be aware of the fact that in case of typos, srtm2osm will just ignore your misspelled option instead of throwing an error. You specify one or more area(s) to cover and some additional options. You can specify the coverage area in three ways:

All options can be specified multiple times to download more than one area at the same time. Attention: All values are interpreted as decimal degrees. So 46.51 equals 46.51 degrees, not 46 degrees 51 minutes.

If you want to cover a large area, use -large option, which turns on 'large area mode'. In this mode each contour is written to OSM file immediately upon discovery.

Be advised that a really large area causes problems: There is a .NET restriction which limits the maximum memory usage of the SRTM cache to 2 GiB. To workaround that, the filesystem is used as cache, when this limit is reached. That means a file bigger than 2 GiB will be created in your location for temporary files (and deleted afterwards). But even since SSD's are way slower than RAM, the process takes a whole lot more time, so be patient. The program will output a warning message when this happens. You should try to split the covered area in smaller chunks (see below). With this technique User:Michi2 was able to create a file of complete Japan, which had over 347 million nodes and 5.5 million ways, but also was nearly 73 GiB large.

Experiment when selecting the area size, first try with the small area (up to 50 km). If the area is large and hilly, the generated OSM file could become very big and basically useless for further processing by renderers. As an experiment, I ran the tool on the area which covered the whole of Sicily and it produced an OSM XML file with 450 MB in size.

The tool does this automatically. It connects to the NASA FTP server and downloads the zipped tiles which it needs to process your request. It then unzips the files and stores them in a cache directory, so that it doesn't have to download the same tiles the next time it needs them. The first time you use the tool it will create an index file of all SRTM tiles present on the FTP server. This is needed because the tiles on the server are organized into subfolders corresponding to continents and Srtm2Osm has no way of knowing which tile belongs to which continent.

You can also use a different download server by using the -source option.

If you want to have contours generated in feet instead of meters, specify -feet option. You should also set an appropriate elevation step.

You can specify the step size (in meters or feet, depending on the usage of -feet option) between adjacent contour lines by using -step option.

Srtm2Osm stores elevation contours as OSM ways tagged with contour = elevation tag. Also, the ele tag contains the elevation of the contour (in elevation units). The nodes and ways have ID numbers starting from 9,223,372,036,854,775,807 and are decremented for each new element in order to avoid the conflict with the actual data from the OSM server.

If you don't like this high ID number, you can also set the starting ID with the -firstnodeid and -firstwayid options. If you want the IDs to increment, use the -incrementid option.

You must use the -firstnodeid and -firstwayid options if you plan to use the contours with splitter and mkgmap. long.MaxValue is a reserved value in splitter, and it will throw an exception when it encounters a node or way with that id. See also a discussion on the mkgmap mailing list.

The amount of node references in a way is not restricted. If you prefer to limit this to a certain amount, use the -maxwaynodes option.

By using -cat option, the tool will set an additional contour_ext tag for all contours. The value of the tag will represent the category of the contour (either elevation_major, elevation_medium or elevation_minor). This is useful if you want to use contour data with the Mkgmap tool. Example:

will mark all elevations which are multiples of 400 as major, all other multiples of 100 as medium and all other as minor. The units of elevation are determined by the usage (or non-usage) of -feet option. You can also use the -cat option in combination with the -step option. Example:

If you want to merge your existing OSM file that you have downloaded from the server using JOSM with the contour data, you can use -merge option to specify that file.

If you use the -large option, every XML element below the root element will be copied to the new file, regardless of the content. If you do not use this option, the merge file will be loaded and parsed into memory.

However, it is important that there are no duplicated ID's. If you have problems with that, use the -firstnodeid and -firstwayid option.

The -o option allows you to specify the output path:

If you want to process a really large area, you should try to split the bounds into smaller ones with the -splitbounds option. This reduces the memory footprint vastly and you have the chance to really get a large file of a large area. This option needs the width and height of the "working boundary" in decimal degrees:

This example will split the given area into 5° wide and tall working boundaries.

With this technique it should theoretically be possible to process the whole world at once, though this has never been tried.

If you want to use the contour lines with Garmin, the default values of srtm2osm are not usable - they lead to several error messages in splitter and mkgmap, resp.

As noted above, you have to set the -firstnodeid and -firstwayid option because the default value is a reserved value in splitter.

Next, when you do not use the -maxwaynodes option, extremely long contour lines cause an inflation of the file size of the tiles created by splitter. Afterwards, mkgmap will fail with an OutOfMemory error.

The following rules can be used to render elevation contours using Osmarender (version 6):

The tool is currently in beta mode. I tested it on certain areas and it worked OK. If you see any errors, please report them in the discussion page.

Things Still To Do

Development of this application has been abandoned by the original author, don't expect any further features. But leave your wishes on the discussion page, User:Michi2 will try to fulfill them.

Srtm2Osm needs at least Mono 4.8 to support the encryption protocol TLS 1.2 currently (11-2017) used by the SRTM server. Debian ships 4.6, so the Mono package in the Debian repo will not work. Luckily the Mono project itself hosts repositories with newer versions. Follow the install instructions to add the Mono repo, afterwards install the package libmono-system-web4.0-cil from the Mono repo:

This should install the Mono system due to the dependencies of this package. The =5* should ensure that the newer version 5.4 from the Mono repo is used. Otherwise use a tool like aptitude or use apt pinning to choose the right repository. Afterwards you are able to run Srtm2Osm with this command:

I've had success running Srtm2Osm on Ubuntu Gutsy (7.10). I simply downloaded & extracted Srtm2Osm-1.4.25.1.zip, then made Srtm2Osm.exe executable. I have various mono libraries installed, and I suspect having these is what allows it to work. If you know more about getting this to run on Linux, please add it here. Avantman42

Also needed to install the packages mono-gmcs and libmono-i18n2.0-cil to fix a 'Cannot open assembly' and 'CodePage not supported' error in a Linux/Debian environment. --Lambertus 20:07, 12 March 2008 (UTC)

I confirm that it runs on Kubuntu 8.04 as well. Followed above instructions and installed all mentioned packages. --GoemonGPS 26 March 2009

And then you should be able to run srtm20sm as

And then you able to run srtm20sm as

Alternatives exist that do not require a .NET/Mono environment and may offer other advantages in some circumstances. None of these are a direct replacement for Srtm2Osm though: